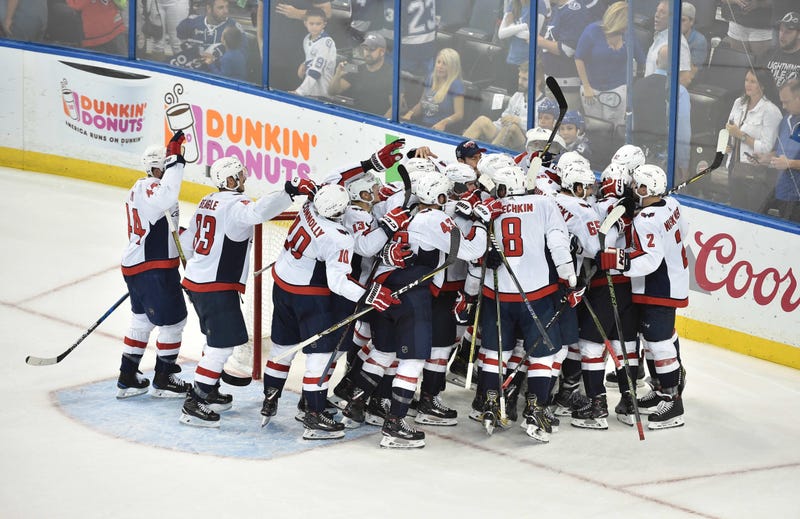 It’s FINALLY happened Washington D.C. – the streak, the curse, the demons, the frustrations and the anguish are all OVER!

The Washington Capitals are CHAMPIONS of the NHL’s Eastern Conference and will play starting Monday night in Las Vegas for the Stanley Cup!

They erased a three-game losing streak in the middle of the series and 20 years of frustration to climb another mountain and now will play for the greatest trophy in all of sports.

The Caps won 4-0 in Tampa Wednesday night and even though the game wasn’t as one-sided as the final score would indicate, it doesn’t matter one bit.

Alex Ovechkin opened the scoring 1:02 in on a knuckling one-time ‘blast’ past Andrei Vasilevskiy on a great feed from Evgeny Kuznetsov. Tom Wilson set the first goal up in motion hitting major agitator Chris Kunitz cleanly and forcing a turnover. Wilson took the puck up the right wing and deftly dropped it to Kuznetsov on the fly, who found Ovechkin, and the Caps were on top to stay.

Andre Burakovsky scored back-to-back goals to bury the Lightning before the end of the 2nd period, thanks to another great chip of the puck by Wilson, who edged it to Lars Eller and then onto to Burakovsky. Burky untangled himself from Dan Girardi, so the goal was unassisted in the end but the play and score is not made without Wilson and Eller.

Burakovsky then brought the thunder down on the Lightning and turned the lights out with a breakaway goal at 16:31 of the 2nd to make it 3-0. John Carlson had a great outlet pass to spring Burakovsky for Carlson’s 13th assist of the Stanley Cup Playoffs.

Barry Trotz rightfully benched Burakovsky for Saturday night’s Game 5 in Tampa. He had the guts to put him back in the lineup in Game 6, when it would have been easy not to. You saw his speed flash once that night on a break-in opportunity and once Wednesday night before his two goals.

Another magical touch displayed by Trotz in this magical run to the Stanley Cup Final. Not to bench Burakovsky. That was easy. The much harder decision was to put him back in the lineup after a Game 5 loss when you can make an argument that there wasn’t a huge reason to do so.

Trotz had a gut-feel and took him off the fourth-line and put him with Lars Eller and Brett Connolly on the third line and it paid off in the biggest win in Capitals history.

The re-configured fourth line without Burakovsky contributed in a huge fashion to Monday night’s season-saving Game 6 win and the good times kept rolling down in Tampa on Wednesday.

Braden Holtby was simply fabulous for a second-straight game. Quite simply, he wasn’t very good for three games in the middle of the series, all losses, and he was terrific in pitching back-to-back shutouts to help his team advance.

He became the second Caps goaltender in their playoff history to have back-to-back shutouts. The last time? You guessed it! 20 years ago, when Olaf Kolzig did it against Ottawa in the Eastern Semifinals per NHL Public Relations.

Nick Backstrom, capping a very good night for the Capitals' centers, put the icing on the championship cake with an empty-net goal to put Tampa out to pasture.

The amazing storylines just continue in a storybook season for the Capitals.