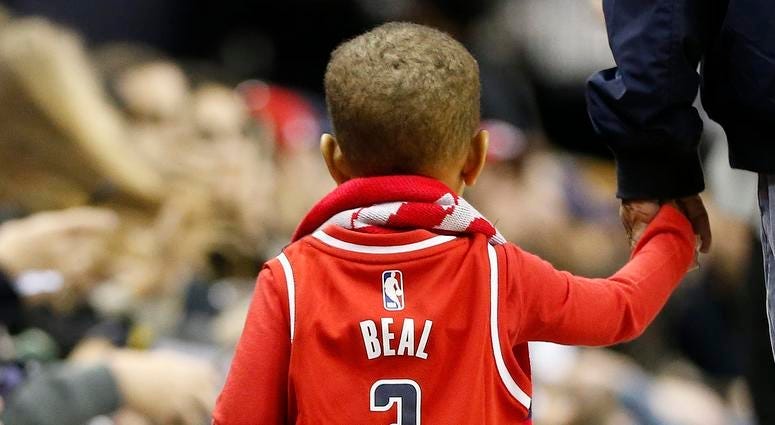 Washington, D.C., is home to more than a dozen professional sports teams and hundreds of pro athletes, all trying to forge a meaningful connection with fans.

While scoring points, winning games and competing for championships is important for the city, the guaranteed way for athletes to make an impact is through charitable efforts.

During Black History Month, we’re celebrating our most charitable athletes, who go above and beyond for their fans in the D.C. region.

Here are ten that make D.C. a better place for the people who live here:

John Wall: Wall is on the verge of becoming D.C.’s highest-paid athlete, and intends to inject much of that back into the community. Three years ago, he gave $400,000 to the Bright Beginnings homeless center in D.C. He is a familiar face at the Wizards’ charitable events, as well as those of his teammates and friends around the league. He donates hundreds of free backpacks stuffed with school supplies every school year and hosts basketball camps in D.C. for underserved kids. For this and other work, he won the 2016 NBA Cares Community Assist Award, and he’s already thinking of ways to expand his work. LeBron James’ decision to open his own school in Akron really inspired Wall, who called it “the greatest thing ever.” Perhaps Wall’s best work for the D.C. community is still yet to come.
DONATE to the John Wall Family Foundation
Kevin Durant: Wizards fans can only dream of Durant coming home, but it’s actually something that he does regularly, to give back to the D.C. community. His charitable foundation was created to help low-income, high-risk youth through educational, athletic and social programs. This means fully renovating four community basketball courts in Maryland and D.C. He also made a 10-year, $10 million commitment to bring a college completion program to Prince George’s County, while also creating the state-of-the-art Durant Center focused on education and leadership.
DONATE to the Kevin Durant Charity Foundation
Josh Norman: When Norman signed with the Redskins in 2016, he became the highest paid cornerback in NFL history, and immediately ramped up his charitable efforts. Last year, his Starz24 Foundation made headlines as he personally assisted migrant families in San Antonio. Before that, he raised hundreds of thousands of dollars for hurricane relief in Puerto Rico. But his impact is also felt closer to home, providing middle school students in the District with backpacks and school supplies. He also donated $100,000 for D.C. public school outreach programs.
DONATE to Norman's Starz24 Foundation
Vernon Davis: Long before Davis played in Washington, he grew up here, and has embraced his NFL platform as a way to give back. That was the inspiration behind The Vernon Davis Foundation for the Arts, designed to offer art education and scholarships to low-income students. He also launched the Read 85 reading campaign that included visits to six underserved public schools in the region, impacting 3,000 students. He has also used his platform to help fight homelessness and encourage youth athletics, becoming an obvious choice for the Redskins’ Walter Payton Man of the Year award in 2018.
DONATE to the Vernon Davis Foundation
Darrell Green: Longevity was one hallmark of Green’s Hall-of-Fame football career, so it’s no surprise that he has been giving back longer than other members of this list has been alive. That includes 29 years of his “Christmas with the Redskins” event that provides clothing, shoes and gifts to 200 underserved kids in the community. That includes his role in the Strong Youth Strong Communities, and his creation of the Darrell Green Youth Life Foundation, which focuses on education and mentorship of kids and families in need.
CONTACT the Darrell Green Youth Life Foundation
Lorenzo Alexander: The “One Man Gang,” was a role-player during his time with the Redskins, but a star in the community. The only reason that he isn’t listed higher is because most of his charitable work has shifted to Buffalo (where he plays for the Bills) and his native California. Alexander’s ACES Foundation had a very successful “Ride 2 Provide” charity biking event that supported military families in the region. The event was last held in 2016, four years after he left the Redskins.
CONTACT Alexander's ACES Foundation
Bradley Beal: Beal is only scratching the surface of his charitable potential, but he made a big impact in 2018. He adopted the Ron Brown College Prep High School basketball team, joining them at practice, mentoring the students, providing tickets to Wizards games, buying new school uniforms (and deodorant), and buying everyone holiday gifts—two new pairs of sneakers. In the future, he’s considering adopting other teams, working with inner city youth, children’s hospitals and organizations that fight kidney disease.
VISIT Beal's website
Victor Oladipo: Like Durant, Oladipo has never played for his hometown team, but he is still a hero in the community. His sister, Kendra, became deaf in the second grade, giving his a personal connection to D.C.’s deaf community. While playing in other cities, he has returned to give back to the Model Secondary School for the Deaf and Gallaudet University in D.C.
VISIT Oladipo's website
NaVorro Bowman: He may have played his entire career on the West Coast, but Bowman never forgot where he came from in suburban Maryland. His 4th and Goal Foundation was launched in 2014 to provide low-income, at-risk youth in D.C. and the Bay Area with safe places to play. His goal by the end of 2017 was impact 10,000 children through his Play Zones program. He also returned to D.C. each summer for the last five years of his career to host a youth football clinic that focused on building football and life skills.
Jonathan Allen: After attending Stone Bridge High School in Ashburn, Virginia, Allen had no problem embracing the community after he was drafted by the Redskins. Last season, after switching his number from 95 to 93, he had to figure out what to do with his old jerseys. He gave away signed jerseys to the first 100 donors that sponsored a youth football player in the Chesapeake Parks, Recreation and Tourism Department.

Win or lose on the field or court, D.C. is fortunate to have mentors, humanitarians and philanthropists like these that can give anyone reason to be a fan.