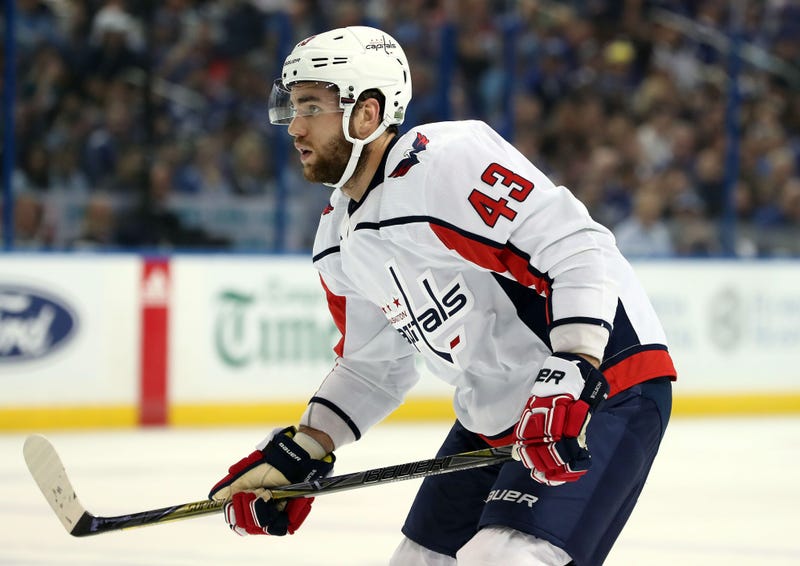 The NHL Department of Player Safety handed down the lengthy ban before the Caps' home opener Wednesday for an illegal check to the head of St. Louis' Oskar Sundqvist. Wilson will forfeit one-quarter of his annual salary ($1,260,162.60), which will go to the Players' Emergency Assistance Fund.

The NHLPA has formally filed an appeal on behalf of Tom Wilson for his 20-game suspension. The timing of when NHL commissioner Gary Bettman will hear it is still being determined.

If commissioner Gary Bettman upholds the appeal, Wilson will take his case to a neutral arbitrator and per the NHL: “The standard of review will be whether the League’s finding of violation of the League Playing Rules and the penalty imposed were both supported by substantial evidence.”

GRANT & DANNY: Paulsen Tees off on NHL
The hit and length of the suspension have been a major talking point across the hockey world. Some arguing the suspension was too harsh and others arguing it was appropriate because of Wilson's past transgressions. Here are some notable quotes from the conversation.
Devante Smith-Pelly, Washington Capitals“Honestly, I think it is garbage, if I’m going to be honest.” ... “We watched a video from the league saying what hits are good and what aren’t. They showed some hits way worse than that, maybe not in force, but in regards to the head that were so-called allowed, and I guess he just had a different rule book. It’s garbage, honestly.”
Chris Kuc, The Athletic"The NHL hasn’t always done the right things when it comes to protecting its players but I do believe those in charge at the Department of Player Safety are trying to change a culture and eliminate head shots. And they do need to be eliminated because guys are dying as a result of repetitive head trauma." ... "It’s very possible that if the appeal process makes its way past commissioner Gary Bettman (likely) and goes to a neutral arbitrator, Wilson’s suspension could be reduced a few games." ... "No matter what happens, Wilson has to learn to play within the rules or he will find himself facing harsher and harsher punishments."
Jeff Gordon, St. Louis Post-Dispatch"Washington Capitals winger Tom Wilson is either a moron or emotionally unstable."
Greg Wyshynski, ESPN"Wilson is appealing, and I'd be surprised if the 20 games isn't reduced by a neutral arbitrator: The leap in games for his suspensions is exceptional, as the NHL admits four bans in just over a year is uncharted territory. Still, it'll remain a considerable suspension, and one that clearly sends a message to Wilson: The next hit to the head will be your last for quite a while."
Kyle Cantlon, Vice Sports"It was an absolute necessity for the NHL's Department of Player Safety to come down hard on the Washington Capitals forward, who time and time again has shown complete reckless abandon and disregard for the safety of his coworkers" .... "He plays the game so hard and his teammates and Capitals fans absolutely love him for it, but man, this dude needs to relax and figure out how to play the game like a normal human being before he literally murders somebody and ends his own career in the process."
Robin Brownlee, OilersNation"Hits to the head will happen in the course of a game as fast and as violent as hockey. We will never eliminate all headshots unless we take hitting out of the game. Nobody wants that. The physicality of the game is part of what makes hockey great. That said, the NHL can’t allow hits like Wilson made on Sundqvist. Want to light a guy up when he’s got his head down cutting through the middle? Go ahead. Just don’t hit him in the head."
Doug Armstrong, St. Louis Blues General Manager“My issue with it was it was the second period of the last preseason game. I don’t understand the logic of hitting someone like that at that time of year. But in all candor if Washington wanted to trade Tom Wilson there’d be 30 (teams) give them a call. That’s the nature of our business.”
Follow @1067theFan on Twitter.