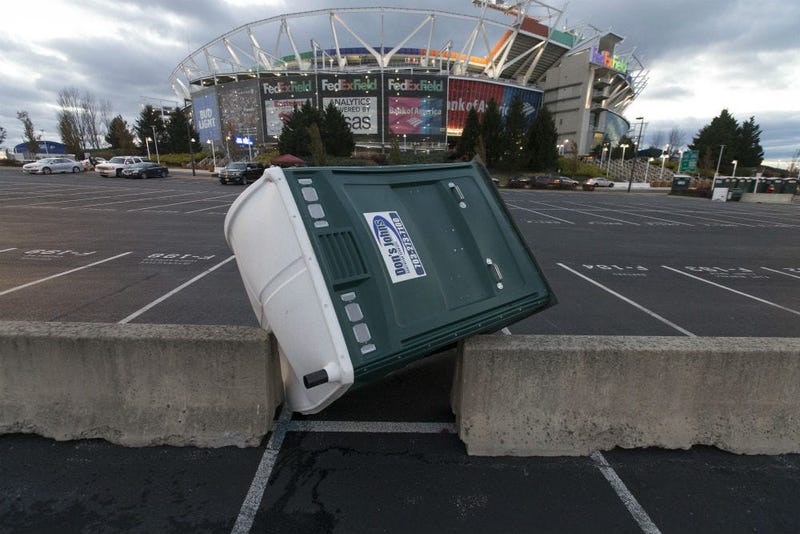 Maryland Governor Larry Hogan indicated he would not be continuing his efforts to persuade owner Daniel Snyder and the Washington Redskins to build their next home on land near MGM National Harbor in Prince George's County.
A spokeswoman confirmed to The Washington Post, Hogan is now withdrawing from his efforts "at this time" to entice the team to build a 60,000-seat stadium in Oxon Cove Park.
In the latest blow for Snyder and team president Bruce Allen another potential location for a new stadium appears to be off the table. This will mean the Redskins are likely to remain at FedEx Field for the foreseeable future.

Hogan is moving forward with a plan to acquire the Oxon Cove land in a swap with the U.S. Interior Department, but is doing so without the Redskins in mind.

“We are not continuing discussions with the Redskins regarding this site at this time, however we are moving full steam ahead with acquiring state control of the Maryland Gateway in Prince George’s County from the federal government,” said Amelia Chasse, a spokeswoman for Gov. Larry Hogan. “We believe this site holds significant potential benefits for the region and the state, as does the proposal to expand protected federal parkland in Western Maryland.”

So sad... team is such a nightmare MD not interested. VA not particularly interested. DC would be great but big hurdles there too. https://t.co/3OCm2p2Sno

After initially signaling support for a football stadium on the park site, Hogan changed his position in January and appeared indifferent on the matter after mounting public pressure.

“Whether or not it’s ever going to be a stadium, I don’t know,” Hogan said at the time. “That’s up to the people in the area to decide. Doesn’t really matter to me one way or the other.”

Constructing a new home on the site of RFK Stadium remains the preferred option for the Redskins, but that space presents numerous challenges and faces vocal opposition.

“We’ve always believed we have the best location,” Bowser said. “We think RFK is the most suitable site for not just for a stadium but a whole mix of uses and that’s been our approach with the National Park Service — that the District has to extend its control of the RFK site as well as be able to do more than sports and entertainment uses.”

Bowser said the team “would have to build its own stadium,” but did not elaborate on whether D.C. would provide the Redskins a free lease or other perks.

In late 2018, D.C. officials and the Redskins attempted to acquire the RFK land in a spending bill before the Repbulican-controlled Congress, but the measure failed to pass before control of the House changed hands in January.
Later that month, D.C. Councilmember Charles Allen (Ward 6) launched an online petition “HailNoRFK” against giving away public land or D.C. tax money for a stadium that has over 3,700 signatures.

"As a DC resident, I don't want to see DC hoodwinked into paying for a billionaire's stadium," the petition read. "The District needs our tax dollars to create new housing at all levels, support local DC entrepreneurs who run small and local business, take urgent steps forward to shift to a 100% clean energy environment, build larger and modern schools for our growing city, fund our Metro system, and in general spend money to make life better and easier for DC residents."

Virginia is another option, but there has been little interest from the state under Governor Ralph Northam.

With options dwindling, the team will remain at FedEx Field, where the Redskins are contractually obligated to play until 2027.