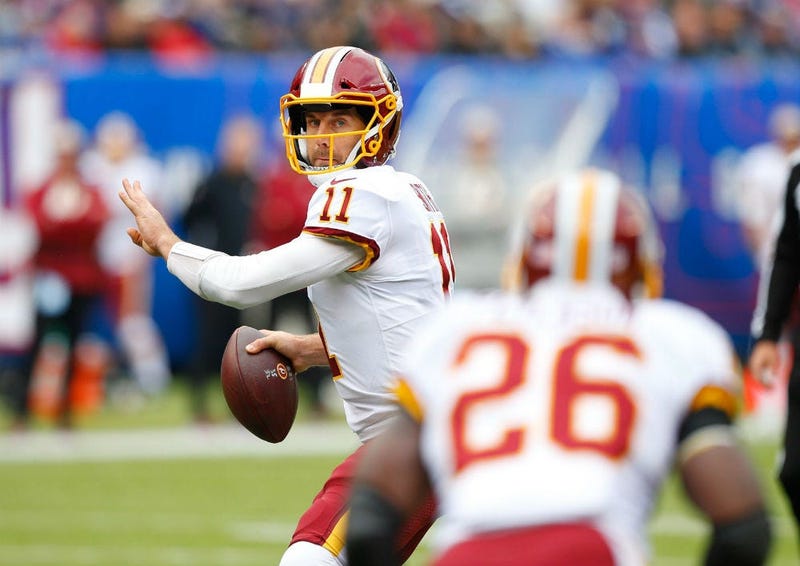 Facing one of the worst defenses in the NFL, the Washington Redskins offense has another big opportunity to impress.
On 106.7 The Fan, Grant Paulsen and Danny Rouhier discussed which offensive player is key for Washington to be successful.
"Alex Smith, he's gotta be better than he's been," Rouhier said Friday. "The days of 170 yards and maybe a touchdown because Adrian Peterson broke a tackle of a crappy linebacker close to the goal line on a check down can not continue for the next two weeks. "

"You must score points," Rouhier continued. "He must be better than he's been passing the football. He must be accurate, he must have the ball out on time,  he can not run into pressure when there isn't any, he needs to be better than he has been. They can not win scoring what they've scored over the last four weeks where they've averaged 18 (per) game."

One area of concern for the Redskins is the offensive line as they will be without starting left tackle Trent Williams due to a thumb injury. However, Williams' replacement Ty Nsekhe is expected to be a solid deputy.

The good news for the #Redskins is that Ty Nsekhe has been outstanding every time he has filled in for Trent Williams at left tackle.

The big advantage for Washington: Atlanta's defense is putrid. They are allowing 6.4 yards per play, 419.4 yards per game, and 30.3 points per game. The Falcons are 30th in the NFL in those three key defensive categories.

"Take advantage of them," Paulsen said. "You know what doesn't matter? How bad a defense is if you don't play well against them."

"The Giants traded one of their top defensive lineman, one of their starting corner backs, and were without a linebacker. One in all three levels (of defense). It meant nothing for this passing game. At some point you gotta show something," Paulsen said.

The recipe for Redskins success on Sunday is simple: Alex Smith beating a bad defense. Can he do it?