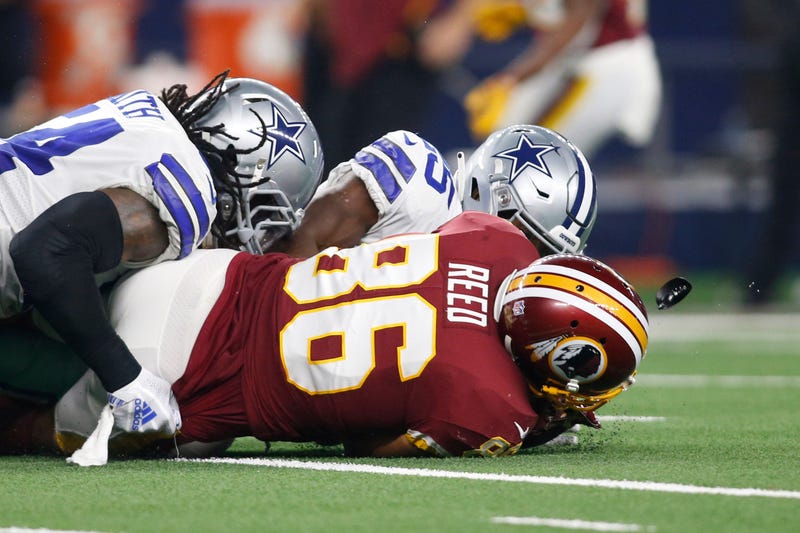 Jordan Reed has every right to be furious, clear hit to the helmet and it goes uncalled. Has to be frustrating, especially for a guy with a history of concussions. pic.twitter.com/v6EBmS2qNW

No flag was thrown, and Reed was understandably fuming.

Jordan Reed has every right to be mad. that hit should of been called. @NFLOfficiating learn how to do your job right. pic.twitter.com/wSOTibO8Zk

Jordan Reed has every right to be pissed. Officials are a joke when they decide what’s ‘safe’ for the players. #WASvsDAL pic.twitter.com/h8tX7pGKYM

Redskins Twitter unleased the fury as well after the seemingly egregious no-call.

How did Jordan Reed not get a penalty for helmet to helmet there? Facemask to facemask blow against a guy with concussion problems. Nothing. #Redskins

What’s the point of refs or rules if you’re not calling that helmet-to-helmet on Jordan Reed?

I'll say it again. ANOTHER missed call by this @NFL officiating crew. That's the story. Not BAD calls. ANOTHER miss. Feel awful for my guy Jordan Reed who rightfully is angry, considering his history. These guys are in a tryptophan coma. #Cowboys #Redskins

I was totally ready for Jordan Reed to chokeslam the ref after that. I wouldn't blame him even a little bit either, that's the most obvious non-malicious helmet to helmet hit I've seen. pic.twitter.com/qbqpjAhFzE

It's considered wrong to blame referees for losses, but the Redskins certainly have found themselves on the wrong end of several calls in the last two weeks.

By my count that is four blatant, hideous missed calls in this game and obviously it comes the week after the missed Norman call.1) no facemask on Colt in 1st2) Moreau holding call3) No PI call on the last Colt INT4) This not being called helmet-to-helmet https://t.co/xlIcJqoKHS

In last Sunday's loss to the Texans, Josh Norman was called for defensive holding on a key third down in the fourth quarter, which allowed Houston to keep possession and run more time off the clock.

And then on the Redskins' final possesion of the game, Josh Doctson was contacted by two Texans defenders before a Colt McCoy pass reached him, but the refs did not blow their whistles.

Santana Moss told Chad Dukes Monday, "One of the things I've always paid attention to, and I talk about the refs time and time again. When games are close, they're not going our way when it comes to them deciding it for us. No, they're not giving that to us. And that's just been something about Redskins and the refs."

So, uh, Santana Moss starting to look not so crazy for his conspiracy theory about the refs and the Skins...