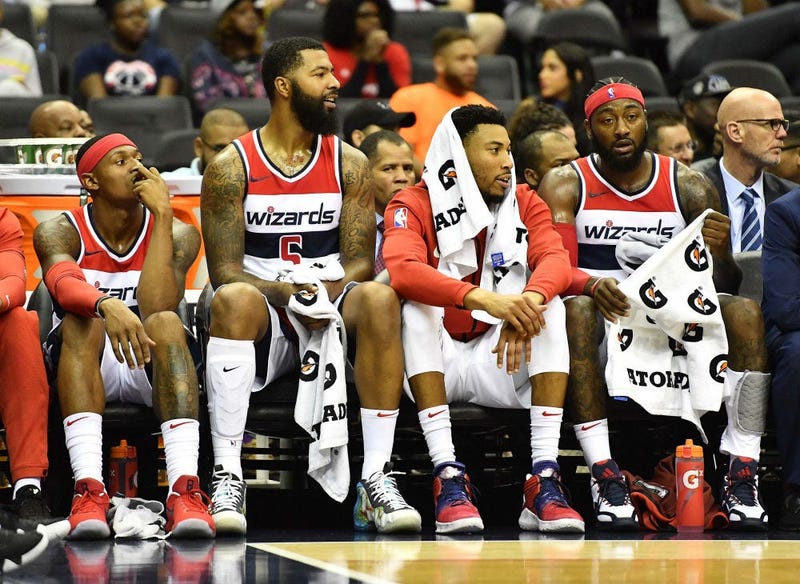 The Washington Wizards made a pair of trades before the NBA's deadline to "stay competitive," general manager Ernie Grunfeld said Thursday.
In an interview with The Athletic's Fred Katz, Grunfeld said the moves came after the Wizards altered their approach following John Wall suffering a raputured Achilles tendon while recovering from heel surgery.
“We were expecting John back at the beginning of the (2019-20 season). This will be two, three months longer. And so we did have to change our approach," Grunfeld told The Athletic.

On 106.7 The Fan Friday, Danny Rouhier called Grunfeld's moves an embarrassment.
"This is embarrassing," Rouhier said. "It's lunacy. Everybody that is smart takes advantage of the dumb Wizards and the dumb GM Ernie Grunfeld, who should be fired immediately."

"He's terrible at this," Rouhier said.

The Wizards acquired Jabari Parker, Bobby Portis, and Wesley Johnson this week in two deals that saw former first-round draft pick Otto Porter and Markieff Morris depart.
In The Washington Post, Candace Buckner reported following Wall's latest injury, the Wizards made avoiding the luxury tax this season their "top priority" with landing young talent and keeping the team competitive in the present as their second priorities.

“We wanted to give ourselves some flexibility moving forward and get some good prospects that we can look at and players that have good potential that can be part of our future,” Grunfeld told The Athletic.

Many criticized the moves because they prioritized cutting salary above roster building for the future. This is supported by Buckner reporting the Wizards did not pursue a deal for Porter which would net a first-round pick if it would force them to take back an equal amount of salary.

Rouhier said fans should look at this strategy as a betrayal.

"The concern, and this is where Wizards fans should be really excited, was so that the Wizards this calendar year could be under the luxury tax," Rouhier said. "Raise the banner! Right? Get that up in the arena! Big night! Huge night! If you're in section 106, guess what? Your team is under the luxury tax. Get your season tickets now! Get excited, baby!"

"(Grunfeld) is literally walking around proud of the fact they got under the luxury tax," Rouhier said.

The organization was also criticized for the decision to retain 32-year-old Jeff Green and 33-year-old Trevor Ariza, both of whom have value to playoff contenders and are unrestricted free agents this offseason. Grunfeld said keeping these veterans will help the team stay competitive now.

Grant Paulsen sees this as a failure by Grunfeld, arguing the Wizards failed to fully commit to getting better in the future by keeping Green and Ariza.
"Does he just not want to detonate? Which is what I think is the case," Paulsen said Friday. "Is it a matter of, that ownership and Ted Leonsis says you can't do this or is it that he doesn't want to do it?"

A week before the trade deadline, Leonsis reiterated his anti-tanking stance and said the goal was to make the playoffs.

"My expectations are that we are going to make the playoffs and improve on last year," Leonsis told WTOP. "You can’t go to your organization, to your players, to your coach and say, ‘Let’s plan to lose.’ Tanking is also illegal, you get a big fine if you tank."

Leonsis' comments came two days after Wall suffered the Achilles injury in a fall at his home and it is not known if Leonsis knew the extent of Wall's injury at the time he made those comments.

Grunfeld explained the Wizards' change in thinking as one done in consultation with Leonsis.

“You discuss it, and you say, ‘OK, some things in this league you can’t control, and injuries are one of them,’” he said. “And when they happen, you have to discuss it, sit down and have a discussion about it and figure out what the best course of action is for the team for the remainder of this year — but also looking into the future, what helps us the most?”

On the final big trade piece the team has left, Grunfeld echoed Leonsis' statement saying they will not trade Bradley Beal and indicated the team's interest in re-signing him.

“We have no intention of trading Bradley,” Grunfeld said. “We really like his development and the way his game has improved over these years: his character, his work ethic. And we wanna have him as part of our group moving forward for a long time.”

But right now, Rouhier says poor management has made the Wizards not worthy of supporting.