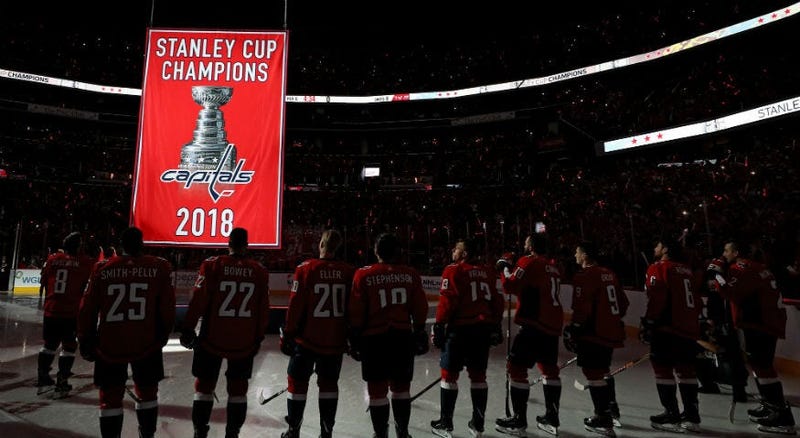 The Capitals continue to cut ties with key members of their Stanley Cup Championship team from 2018.

Two weeks after dumping Matt Niskanen to the Flyers, along with Brooks Orpik's retirement and Brett Connolly's and Devante Smith-Pelly's possible departures via free agency, the Caps traded enigmatic forward Andre Burakovsky to the Colorado Avalanche for draft picks and the rights to a minor league forward, Scott Kosmachuk.
Make no mistake: The Caps are trading a talented forward with 20-goal potential. Ideally, this is not a trade you want to make, considering Burakovsky helped them win a Stanley Cup with two memorable goals in a Game 7 road win to lock up the 2018 Eastern Conference Championship.
But they had no choice. Burakovsky reportedly asked for a trade and the sheer finances essentially forced the Caps to get something for an inconsistent asset they couldn't afford.

Some might look at the deal as cutting ties with another piece of the core, especially when you look at the other pending departures and championship pieces already gone.

That's the wrong way to look at it.

This is strictly about managing the salary cap while maintaining a championship caliber roster during the back-end of Nicklas Backstrom's, Alex Ovechkin's and Braden Holtby's prime final years. Burakovsky was going to cost $3 million plus under the cap, space the Caps couldn't afford on a forward who managed just 36 goals over his last 196 games.

When the Caps re-signed Carl Hagelin, we speculated the door was likely closed on Burakovsky and Connolly staying. And the door might still be closed. As of Friday night, the Capitals have about $9.2 million in space according to CapFriendly.com, which is enough money to bring Connolly back if they wanted to but at what cost?
How would that affect what the Caps do with restricted free agent Jakub Vrana and the rest of the roster? When Vrana re-signs, he projects to make about $4 - 4.5 million per year under either a long-term deal or a shorter "bridge" type deal, the Caps will have roughly $4.5 million to fill at least two bottom six forwards spots.

If Connolly stays, most of their cap space would be absorbed in retaining those two players, which is now possible after Washington granted Burakovsky's wish to leave.

Connolly is everything that you would want to keep. A grinder who has continued to come into his own, during his time in Washington. Burakovsky is more talented than Connolly and finished last season strong, but Connolly is much more consistent.

The Caps could also look outside the organization in free agency, possibly bringing in a player on a short deal for around the same money Connolly is asking for. Former Cap Marcus Johansson is among the players rumored and connected to Washington this offseason.

That's why the Burakovsky trade makes sense. Washington picked up two draft picks, a second and third in the 2020 NHL entry draft, plus gained some flexibility to bring back a key top-nine forward, while still retaining the ability to do any kind of deal with Vrana.

They might even have enough money left to bring back Chandler Stephenson under this scenario.

You might disagree with how the Caps have shaped their roster since winning the Stanley Cup, but in a hard salary cap league, I'm with general manager Brian MacLellan on almost every decision, including this one.
Follow Chris Russell and @1067theFan on Twitter.