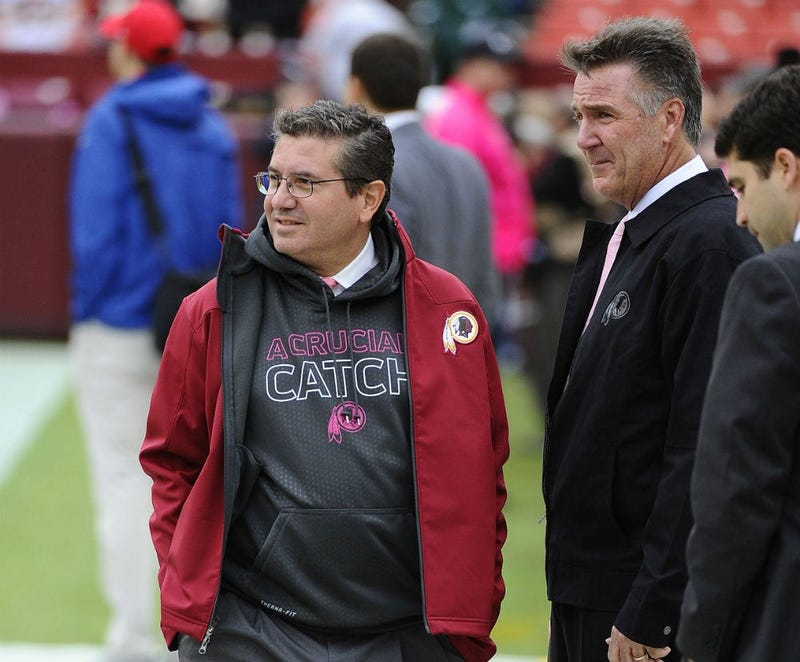 Redskins owner Daniel Snyder and team president Bruce Allen have committed "sports crimes" against the fans, Shan Shariff told Chad Dukes on 106.7 The Fan Friday.
Shariff, formerly of 106.7 The Fan and currently a host for 105.3 The Fan in Dallas, pointed the finger at Redskins management for the team's current predicament and called Snyder and Allen cowards for not speaking to the fans and media.
"For Bruce Allen and Dan Snyder to hide like weasels, like little snakes, just squirming away from the situation," Shariff said. "I was glad that they got hit with the attendance problem this year, I hope it continues to get worse where Dan feels like he has no other choice but to sell."

"But to run like a bunch of spineless jellyfish, like a bunch of little 'words you can't say on the radio.' Like, man up, dude. You wanna sit there and you wanna embarrass the entire District? You wanna sit there and you wanna force fans to give up their fandom? And then you're too scared, too much of a little wuss to stand in front of a microphone and address it and at least explain yourself? That's cowardly. Those are two little cowards," Shariff said.

Allen, who heads football operations for the team, has gone over 577 days without taking questions from the media, the longest active streak of silence for any NFL general manager, per The Washington Post.
Friday it was revealed Allen would remain in his position as team president and would also assume control over the franchise's business side. Shariff had a familiar explanation for how Allen has remained in his position for so long.

"You all should investigate what type of pictures Bruce Allen has on Dan Snyder, 'cause there's some deep dark secret between those two. That's the only explanation for this," Shariff said.

Incidentally, he is not the first person to make such a claim on Dukes' program this week. Sports Illustrated's Robert Klemko said Allen must have "dirt" on Snyder during Thursday's show.

"I went to RFK when the place used to shake," Shariff said. "They have sucked the entire life out of you. It angers me."

But worse than fan anger, is a mass wave of fan apathy.

When fans stop getting upset or angry, that is the sign they are done supporting the team, Shariff said.

"I've stopped getting upset watching Redskins games," Shariff said. "I don't get worked up, my blood pressure doesn't go up. And that's when I knew I was done with the Redskins and that's because of these fools."