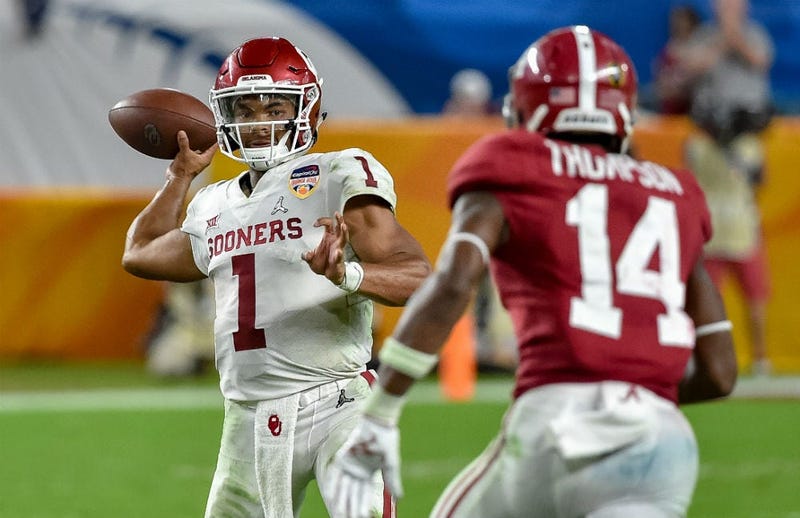 With college football seasons over and only seven games left in the NFL, it is officially mock draft season.

The pre-NFL Draft period is a wonderful time of year from January to the end of April when speculation, anonymous reports, 40-yard dash times, and Mel Kiper Jr.'s ridiculous hair dominate the football landscape.

While mock draft season is reason for excitement, a caution against Redskins fans who look upon mock drafts as an oasis; in reality they are rather small watering holes. But they can quench the thirst of those parched members of the fan base desperate for even a few drops of hope at the 15th overall pick.

With that in mind, at The Athletic, Dane Brugler​ released his second mock draft of the season and has the Redskins taking Heisman Trophy winner Kyler Murray.
"I don't like hard and fast rules. I'm not ruling Kyler Murray out as a great NFL quarterback," Grant Paulsen said on 106.7 The Fan Thursday. "I think Kyler Murray is too small. He is tiny. Have you seen him stand next to the other quarterback? He's tiny. He looks like a small outfield who is fast."

Murray, who is listed at 5'10 and 195 pounds by Oklahoma, was selected ninth overall by the Oakland A's last year and signed for over $4.6 million. But it was reported by The San Francisco Chronicle Wednesday Murray will declare for the NFL draft this week and the A's are considering letting Murray attend the NFL scouting combine.
Paulsen and Danny Rouhier said if the Redskins pick Murray, they will likely have to find a new coach after next season.

"We can't do, 'Hey Jay, we're gonna do your stuff from the pocket, which is moderately effective with a check down-type quarterback like Alex Smith, we gotta do something else. Are you willing to do something else? No? OK, pack your stuff, Skippy,'" Rouhier said. "You've gotta be creative if you want Kyler Murray."

"If you line (Murray) up in shotgun and run nothing but play fakes and misdirection and do, kinda, a poor man's Pat Mahomes-type act and roll him out all the time, he would strike fear in the heart's of defenses. That dude is blazing quick, super fast, nobody squares him up, if he takes care of his body, I'd be in favor of that," Rouhier said.

The oddsmakers in the desert of Las Vegas seem to think Murray will be in the NFL. (Well, at least sooner than he'll be in the big leagues.)

Drafting another defensive player from Alabama may be sensible, but with the Redskins quarterback situation completely up in the air Washington may find it tough to resist taking a QB.

"Can you imagine the Redskins going with a Heisman Trophy winner, who is not a pro-style passer, who's 5'9, and trying to do it that way?" Paulsen said.

Rouhier answered: "Oh, yeah. Of course I can imagine that."

If Washington selects Murray, he will be the second Heisman winning QB out of the Big 12 the team has selected since Robert Griffin III.