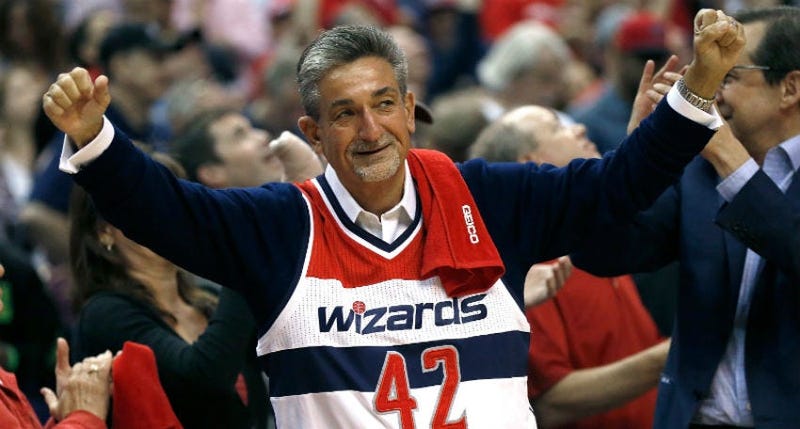 On April 2, the Wizards fired longtime president and general manager Ernie Grunfeld to get a head start on the process of replacing him. On July 2, they will still be looking for his permanent replacement.

How do I know this? Because owner Ted Leonsis told The Washington Post this week interim president Tommy Sheppard will oversee the draft, which he did on Thursday night, and free agency.

And this will likely still be true on August 2, September 2 and the second day of every month until the next time April 2 rolls around and Sheppard will have stayed the interim president of a professional basketball team for a solid year.

This is a problem and it’s patently absurd the Wizards haven't fixed it.

It’s clear Sheppard is running the ship and this is by no means a critique of him. He's been around the NBA for a long time. He said Thursday night he's been a part of 26 drafts, but this was the first time he was the lead for one. He is accomplished, well-liked and well-respected. If Leonsis wants Sheppard to run his basketball team, I have no standing to criticize such a decision. The problem here isn’t Sheppard.

The problem is nobody – from Leonsis and Sheppard down through the Wizards organization and out the doors of Monumental Sports and Entertainment to an angsty and shrinking fan base – knows how long Sheppard will be running Leonsis' basketball team.

It is the substitute teacher theory, but with a billion dollar enterprise and adults. While no one working below Sheppard in the Wizards organization is going to throw paper airplanes behind his back, they might not share information the same way they would with a person in his position on a permanent basis.

If your boss was instead just a temporary boss, wouldn’t you act and interact with them differently? You may not act insubordinately or disrespectfully, but just differently.

The answer is yes because it’s human nature. The stakes are different. The power dynamics are different. The long-term planning and direction of the organization and the individuals in it becomes different because instead of having their eyes on the prize, the goal becomes simply to make it to tomorrow.

And how does Sheppard himself act while carrying the interim tag? What kind of power does he have?

Does he feel like he can be as aggressive as he might want to be in pursuit of players? Or perhaps in pursuit of a reset? Does he have the power to elevate scouts he thinks are doing a good job or get rid of the ones he thinks aren’t? Does he feel comfortable going to Leonsis mid-season if the Wizards are playing uninspired, losing basketball and suggesting they should move on from head coach Scott Brooks?
This isn't a criticism of the plans themselves. That’s a separate column. That column says something about the Wizards being a rudderless ship doing mindless circles in the ocean of mediocrity with zero inkling of a plan of how to get out while the ship’s captain runs up to the bow once a month saying that everyone is doing great.
So how did we get here? Well, in an offseason where two of the five best front office executives in the whole league were on some level available, the Wizards didn’t get a sniff at one in David Griffin, who just completely rebuilt the Pelicans in three weeks, and either bluffed they were pursuing (bad) or didn’t pursue (worse!) the other in Raptors president Masai Ujiri.
Now, where does the franchise get its direction? They are set to stare at the NBA’s version of a fork in the road while driving a middling ride with nothing more than two really expensive tires, one of which is flat.
It also for some reason, has an extraordinarily expensive glove box. No good reason at all. It doesn’t help the performance of the car. It’s not at all more functional than a regular glove box. It’s just there because the previous person in charge did really weird stuff sometimes. The glove box is Dwight Howard.

If Sheppard is the person Leonsis wants running his franchise, he should say so. That could be through next season on an interim basis or on a multi-year deal with the interim tag removed. However, the constant uncertainty is helping nobody and GM candidates don’t magically appear in December.

Sheppard is going to be running the Wizards for the foreseeable future, so make it official.

Or don’t and continue to sail in circles as the fans in one of America’s great basketball cities cry, “Get me the hell off this ship.”