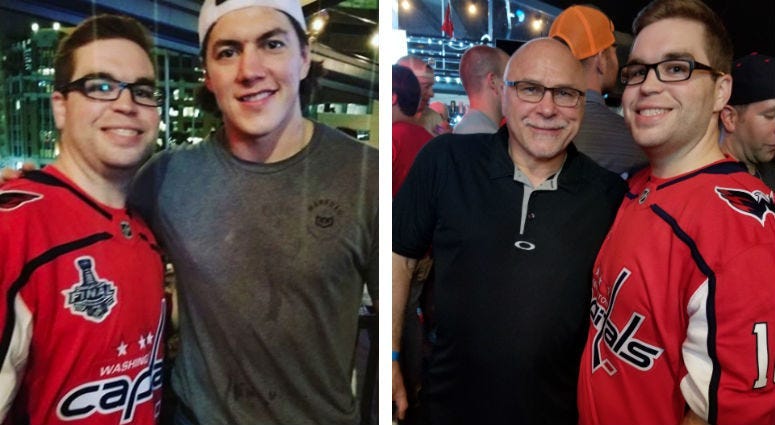 June 10, 2018 06/10/2018 12:37 pm
By Grant Paulsen
It was a night I'll never forget, and I'm not just talking about last Thursday when the Washington Capitals ended this city's 26-year championship drought.
On Friday, a day after the Caps beat the Golden Knights to win the Stanley Cup, my wife and I decided to go out in Arlington to celebrate. We wanted to be around other Capitals fans. We wanted to high-five strangers and feed off the energy of a community that has become hockey-crazed.

Upon finding out that the Stanley Cup trophy had made its way to Don Tito, we decided to stop at a bar we've been to many times to maybe catch a glimpse. We assumed we would get blurry photos from 100 yards away and continue our evening.

We stood on the street outside of the bar for a few minutes, realizing the chances of getting a good look at the most prestigious trophy in sports were minuscule. As we prepared to leave, a familiar face strolled toward us. Caps defenseman John Carlson was wandering through a crowd of folks wearing red, none of whom were recognizing him.

I called out to him and we had a brief conversation. He's been a regular on 106.7 The Fan all season, and I've done many interviews with him over the years. I wanted to tell him how proud I was of him and how amazing the Stanley Cup run was.

He asked why we weren't upstairs at the party. When I told him we weren't supposed to be, he walked us over to the side entrance and asked the bouncers to give us wrist-bands. We spent the next few hours in an intimate setting atop Don Tito with many of the Captials' playoff heroes, their friends and family and a few dozen supporters.

The night was one of the coolest experiences of my life. My one regret? (And check out the pictures below to prove it) ... I was wearing a Caps jersey!

There may have been two other jerseys at the entire party, and I clearly didn't think I would end up at this event.

To spend time with so many of the players that have provided me and so many Capitals fans with a lifetime of memories and sports happiness was one of the greatest thrills of my life as a sports fan.

I was able to talk to Coach Barry Trotz about when he knew this team was going to get over the hump. Jakub Vrana told me stories about how and why he fell in love with the Captials fan base. Devante Smith-Pelly told me what it was like to score as many goals in the playoffs as in the regular season. I jokingly asked Lars Eller if he wanted a mulligan on the extension he signed mid-season before upping his game down the stretch.

I even watched TJ Oshie and Tom Wilson pour shots for people to -- of course -- drink out of the Cup.

It was a night I'll never forget.