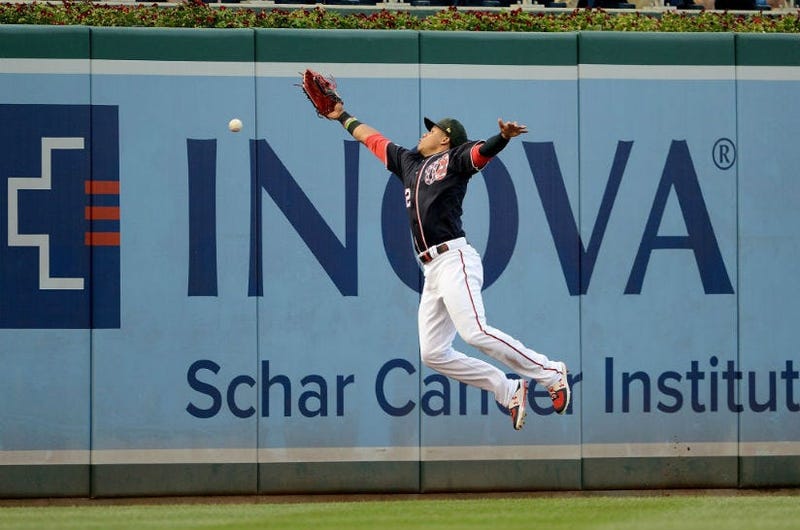 The Washington Nationals lost to the Chicago Cubs Friday night and fell to 18-26 on the season. Not only are they stuck in fourth in the NL East, they now have the fourth worst record in all of baseball.
Nationals GM Mike Rizzo was honest when he said on 106.7 The Fan this week things are "terrible."
"I'm not going to insult the intelligence of everybody listening, the fanbase and everybody else, and say, 'Hey, things are rosy and things are great right now,'" Rizzo told The Sports Junkies. "No, they're not. They're terrible. It's the worst we've played probably since coming off an expansion-type of a roster."

The issues are numerous and familiar through: base running mistakes, injuries, lack of hitting, and bullpen woes.

The Nationals got a decent outing from ace Max Scherzer, but still below his standard of excellence: three earned runs over six innings. There were positives to Friday night's game: Trea Turner returned from injury to contribute two hits in five at-bats and Anthony Rendon added a two-run homer.

And the Nats were in the game after scoring two in the seventh to cut the Cubs lead to 5-4. However, the bullpen.

Another defeat in a close game following a bullpen implosion.

Martinez frustration after Friday night's defeat was noticeable to all.

"It’s frustrating. Trust me,” the Nationals' manager said. “It’s frustrating (for the bullpen to pitch like this), especially when the game’s within reach.”

"We were right there," Martinez said. "If the bullpen holds us it's a different ballgame. They just couldn't do it tonight."

So, can big changes be far behind?

"(The bullpen guys) will tell you right now that they're the ones who are not executing the pitches on a consistent basis," 106.7 The Fan's Pete Medhurst said Saturday. "And at some point here, Mike Rizzo and (Nats manager) Davey Martinez, Mike's scouting staff, they've gotta sit down here and evaluate, 'Alright, who needs to stay? Who possibly needs to go? And what do we do to replace those players?'

"And you fully expect those (bullpen guys) to come in at that point and keep you in the game. Unfortunately, that's not happening on a reasonably consistent basis right now. So it's time, it's probably time, for Mike Rizzo to at least do some shopping."

Of course, in the face of the struggles, Rizzo has remained defiant.

"I'm not settling on lowering my expectations," Rizzo told The Junkies. "My expectations are still: Win this division, the National League East, which is a tough division. It's gonna be nip-and-tuck the whole way. And go deep in the playoffs. And I think we have the roster, when healthy, to do so, and I think that we have the personnel to be a really competitive team in the National League.

"That's my expectations. That's my thought process. And obviously, we have to play a lot better baseball than we are right now to achieve that."

The Nationals did strike gold – at least for the time being – with Gerardo Parra, who has posted a 1.072 OPS over six games after he was cast off by the Giants. Can Rizzo find a few more players like that? Will the Nats make a trade to add bullpen help?

"Right now, they gotta re-group. This is the bullpen we have," Martinez said Friday.

Or will Washington wait for more guys to get healthy to see if the team can return to form?

Rizzo, Martinez, and the Nats have 118 games to figure out the best course of action.

The clock is ticking.