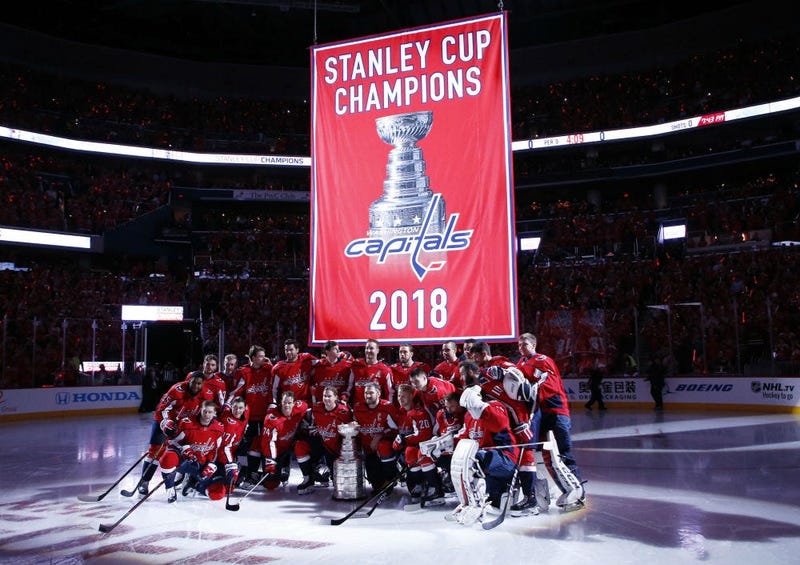 October 6, 2018 10/06/2018 2:49 pm
By Ben Krimmel
The Washington Capitals' summer with the Stanley Cup came to an end Wednesday night when they raised the 2018 championship banner and then throttled the Boston Bruins 7-0. But the festivities of last year's triumph did not end before the Cup, like any tourist, had a chance to see all the sites in the DMV.
Tuesday the Stanley Cup visited The Sports Junkies and it was announced EB, Bish, JP, and Cakes were all getting rings.

A visit from the @StanleyCup... and we're getting rings!https://t.co/lrs092rRSu pic.twitter.com/y8mpaS9id6

The Cup had a busy Wednesday, first sneaking off to Georgetown, before going on a long jaunt around the city.

Our Stanley Pup finally got to see the #StanleyCup today! Thanks to the @capitals for bringing the trophy to campus. Good luck tonight, team! #CapsBannerNight #ALLCAPS pic.twitter.com/5c4CZRnPhy

The Capitals put a bow on the Championship Summer with the Perfect Hockey Day leading up to Banner Night at Capital One Arena. #ALLCAPS #CapsBannerNight pic.twitter.com/V2tbuqWWoP

That night the Caps said their goodbyes to the Cup.

RT if you shed some tears of happiness. #ALLCAPS #CapsBannerNight pic.twitter.com/DyhscZmaei

And spent Saturday morning at Mount Vernon in Virginia.

Quick visit to @Mountvernon which included a visit with George at his residence. #stanleycup @NHL @Capitals @HockeyHallFame pic.twitter.com/rxd0hq59Bn

One place the Stanley Cup didn't visit this summer? Pittsburgh.