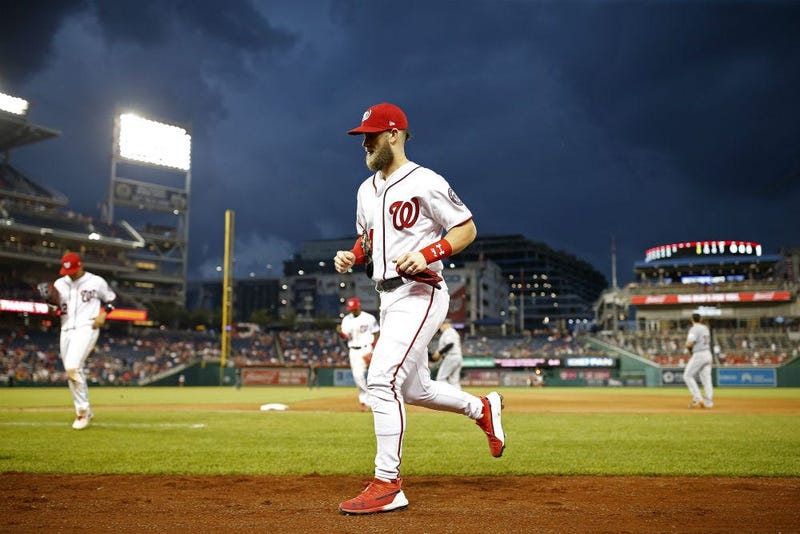 The World Series ended Sunday and the hot stove of baseball's offseason heated-up immediately after. The big question for Nationals fans: Where will Bryce Harper sign?

Before Friday's deadline, the Nats extended Harper a qualifying offer – a standardized 1-year deal worth $17.9 million which would give the team protections if the six-time all-star left Washington this offseason. Harper won't be signing that deal, but it doesn't mean Harper is leaving or disinterest from the Nationals in signing him to a multiyear deal.
Bookmakers have made the Philadelphia Phillies the favorites to sign Harper, with the Chicago Cubs as second favorites.

"How often does a bona fide superstar become available in his mid-20s for nothing but cash? How often do two players like that become available at the same time? Basically never. The Phillies have money to spend and there is no better way to spend it than on Harper and Machado," Axisa wrote.

"The Dodgers, Cubs, Phillies, Yankees, Giants, and Cardinals as the most likely suitors," Dierkes wrote. "The Cubs were the pick here until the very end, and they are still a good match, but payroll concerns pushed us to switch to the Dodgers."
Will Leitch added a dark horse to the mix on Tuesday: the St. Louis Cardinals.
"The Cardinals are kind of an underrated team," Leitch  told The Sports Junkies. "They have a bunch of money to spend, they have a bunch of money coming off the books this year, and they're a team that's missed the playoffs three straight years, and the fan base is getting frustrated enough they'd like to see a big splash."

Harper to the Cardinals was also floated by MLB.com columnist Anthony Castrovince.

"This franchise has the funds to make a top-of-the-market deal happen, and after three consecutive October absences, it has all the incentive in the world to make Harper the solution to the long-standing quest to find a legitimate middle-of-the-order stick," Castrovince wrote. "Though guarded about his personal preferences, Harper has typically been tied to bigger markets. But we know enough about him to know that he would appreciate the Cards' rich history and loyal fan base and, yes, the accompanying dollar signs from a team that hasn't had much luck with half-measures and might be ready for something more dramatic."
Where – and when – Harper signs will be a mystery and the free agent outfielder wasn't dropping any hints Friday when he tweeted next year's cover of MLB The Show.

Honored to be selected as the #PlayStationAmbassador for #TheShow19 cover! Follow @MLBTheShow this offseason to see what uniform I will be wearing on the final cover! pic.twitter.com/31kf0Yel19