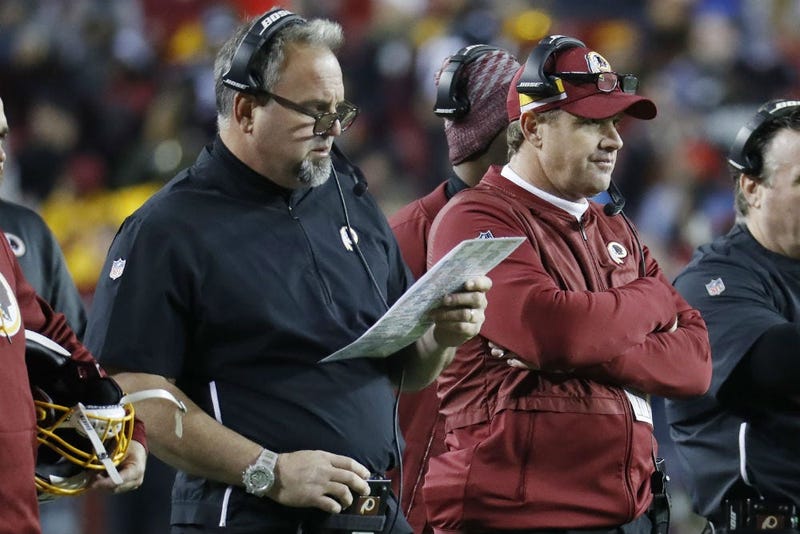 The Washington Redskins may be having trouble attracting top candidates for their coordinator positions because Jay Gruden is likely a lame duck head coach, Jerry Brewer said Friday.

Brewer said some candidates may be turned off at the prospect of joining the Redskins due to uncertainty at the head coaching position.

"You're ultimately offering a coordinator a one-year job," Brewer said. "If you're Steve Wilks and you were just one-and-done as a head coach, why would you take a one-year situation? And that's what's difficult for (the Redskins)."

In a matter of minutes, several top defensive coordinator candidates started to come off the market Friday.

And on the day the Cardinals are landing former Broncos’ HC Vance Joseph as their defensive coordinator, the former Arizona HC Steve Wilks is visiting the Cleveland Browns to discuss their DC job, per source.

New #Jets coach Adam Gase is on the verge of a big hire: Former #Browns interim coach Gregg Williams is in talks with Gase to become their new defensive coordinator, sources say. Things are progressing in this direction, and those involved believe it’ll get done.

106.7 The Fan's Chris Russell reported this week some of Washington's coordinators may leave the team because "they are tired of the three-ring circus" around the organization. Defensive coordinator Greg Manusky remains with the team after a tumultuous year running the defense, but there's a great deal of speculation he could soon depart.

However, replacing Manusky may not be so easy.

Dukes laid the Redskins' situation bare: "How do you go to a defensive coordinator and say, 'Hey, come be the DC for Jay Gruden.' Cause everybody already knows the hand that's been dealt. That, at best, Gruden is on a year-to-year. Most likely he is going to be dismissed after next season unless there's some sort of renaissance under whoever the quarterback is next year. And because of that, if you're Wilks or you're any of these guys that's just coming off getting whacked, why would you wanna go into a situation with that little security? Go with a new head coach that will, presumably, have more of a longer leash."

"I get that argument. Here's the part of that doesn't add up to me," Dukes said. "Why couldn't you go to one of these guys and say, 'Look, you got a raw deal at the last place you were at. We don't know how it's gonna go down here. You come in, we got some talent, look at these guys in the middle of our (defensive) line, you do something with Josh Norman, you make all of this work, you do right by us this season, you're getting the first interview. You're gonna get the first shot, we gotta make a change. Look at this as an audition. Hell, we might make a change in the middle of the damn season. Guess who slides right in?'"

Dukes asked: Why couldn't the Redskins use this situation to their benefit?