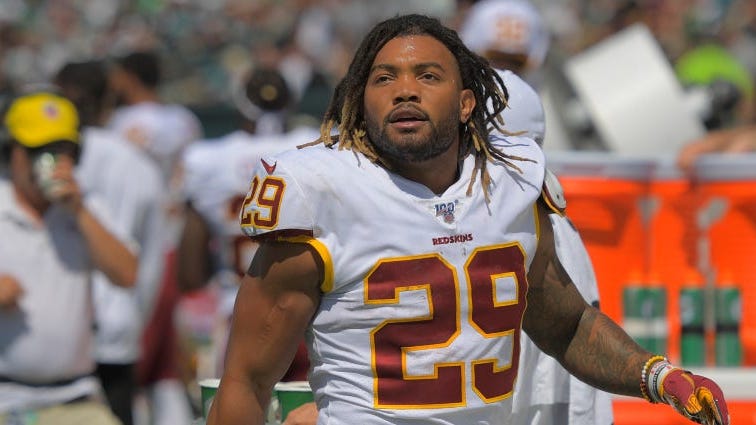 Derrius Guice 'Strangled His Girlfriend Until She Was Unconscious': Report

Ron Rivera didn't mince words when addressing his decision to release Derrius Guice on Friday after the running back was arrested on domestic violence charges.

"On Friday, I made a decision that I believe was in the best interest of this organization, our players and our fans going forward," Rivera said Monday. "Very difficult decision, anytime you have to release a very talented, young football player, it's always a tough decision.

"But this type of circumstance, this type of situation, we take those allegations very, very seriously, and we had to make the decision going forward."

Guice, 23, was arrested on charges of strangulation, which is a felony, destruction of property and three separate counts of assault and battery.

Rivera made clear the buck stops with him on this decision.

"If it was the right decision, we will benefit from it," he said. "And if it’s not, it will be on me. I will take full responsibility as we go forward to try and make sure we do things the right way."

This is the type of decision that could resonate throughout a locker room, especially as Rivera looks to make on his promise to change the culture in Washington.

While Guice has done little on the field since being selected 59th overall in 2018 – collecting only 324 yards from scrimmage and three touchdowns – that's almost entirely due to an unfortunate string of injuries. The back's potential, if healthy, was through the roof, a fact of which every player in that locker room is fully aware.

Even with Guice gone, Washington Football still has a crowded running backs room, with Adrian Peterson, Peyton Barber, Bryce Love, J.D. McKissic and third-round pick Antonio Gibson. The coaching staff was already facing a difficult decision on who to keep. Now with one less body in the room, the remaining backs will have more opportunities to prove themselves.

"We feel very good about the group of guys that we have. We really do," Rivera said. "We think this is a group of guys that are talented. And again, it was a very difficult decision. Trust me, it really was. Derrius is a gifted young football player.

"And, again, it's one of those things where we're trying to get ready for a season, and one thing that we can't handle are situations and circumstances that are beyond our realm. He's gonna have to deal with something for a while and his opportunities to get prepared and ready for the season would be limited. We're looking at get ready in the next five weeks to play our opener."

"With those guys, you're gonna have guys that'll get a lot of opportunities between now and the opener," he said. "And we'll get an opportunity to see which guys will be the best ones for us."