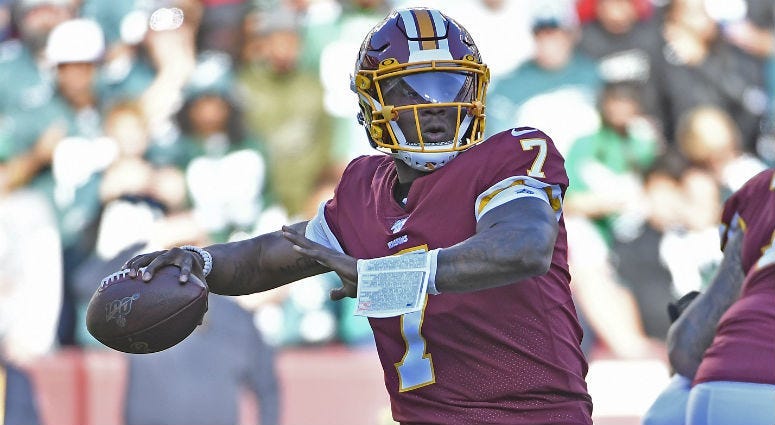 The Redskins have insisted that Dwayne Haskins is the starter at quarterback for the foreseeable future. With that said, a lot of people in the nation's capital have had their doubts.

Those doubts have been intensified as of late with the NFL Draft just 18 days away, and with the burgundy and gold possessing the No. 2 overall selection.

"I would've loved to see Dwayne Haskins get the opportunity to be this starting quarterback in Washington, not have a talented guy like Kyle Allen behind him. (But instead) a more veteran seasoned guy behind him that (Haskins) knows the keys are his, and he fully go out there and make mistakes and just be young and energetic. With Kyle Allen breathing down your throat, you are not gonna be able to make many mistakes," Hall said on NFL Network. "I love the kid, but I don't know how (Haskins) wins the starting job, man."

Hall called into 106.7 The Fan later that afternoon and discussed his ongoing concerns about the Redskins signal-caller.

"I'm absolutely worried for Haskins keeping the job because I want to see this organization in a good place in five years and ten years, and in, you know, the next two (or) three years, not necessarily just next season. If you think about how this offseason already has unfolded, it's very similar to the year of the lockout, where you're not going to get a lot of time with your teammates. Knowing that Kyle Allen has the advantage of knowing this offense, having played in meaningful games with this coaching staff, you know those guys trust him."

In what was already was a monumental offseason for Haskins, the ongoing coronavirus pandemic has restricted all team events and OTA's, adding another hurdle for the ex-Buckeye to overcome. The addition of Allen as the backup will further complicate things in D.C., according to Hall.

"To bring him into a quarterback room that has Dwayne Haskins, a young, impressionable player that's still trying to figure out who he is as a player in this league, who had great success in college, I've always felt like, if you're going to give the keys to a guy, give the keys to the guy, " Hall said. "Don't put anybody behind him, especially in this situation, that's just going to cause any type of distraction or any added pressure to Dwayne Haskins and bringing in a guy like Kyle Allen, does he help this football team? Absolutely. Will he hurt, in some way, Dwayne Haskins' progression? I think so."

Grant Paulsen and Eric Bickel discussed the situation the Redskins currently have at quarterback Sunday. Bickel then asked about the confidence the former has in Haskins.

"If you had to put a percentage on it when this is all said and done, is Dwayne Haskins gonna end up being guy, like at the end of this year, are we going to say 'he's the guy', from 0-100%, what is your percentage?"

"My confidence level that he is the long-term answer," Paulsen said. "I would put that the percentage chance of me saying, definitively, that he is the guy at the end of this year, I would say 30%."

When discussing the idea of a quarterback competition, Paulsen wasn't having any of it.

"I'm not having a competition," he said. "Unless it's so bad that it's embarrassing. If Haskins is so bad at practice or in games and Kyle Allen is so much better, then at some point, you have to make that change. I don't think that's going to be the case. If that is the case. If he's THAT bad and Allen is obviously better, 'Cousins-Griffin style', then you know that Haskins isn't the guy and none of this matters anyway. At that point, you're ready to move on."