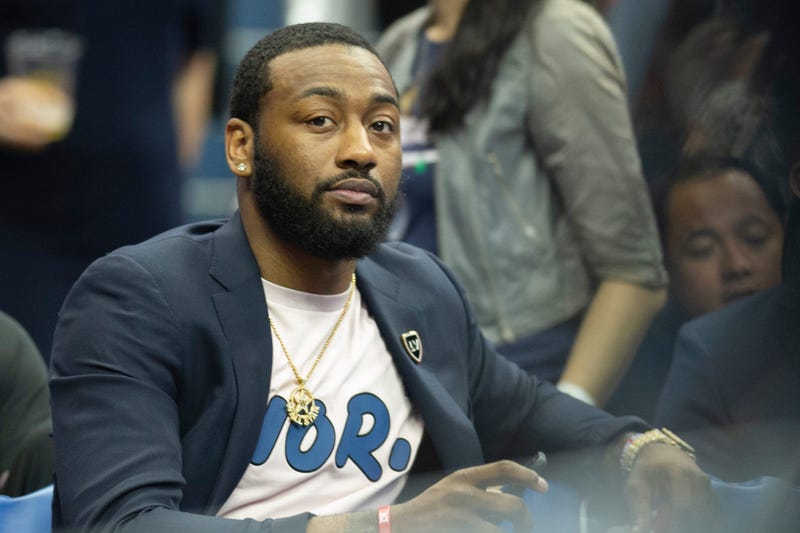 Nearly four months after undergoing surgery to repair a ruptured left Achilles tendon, Washington Wizards point guard John Wall was seen walking without a brace or boot, but with a slight limp Sunday.

Seated courtside to watch the Washington Mystics take on the Dallas Wings at Entertainment & Sports Arena in Southeast D.C. were a pair of well known D.C. sportsmen as Wall was joined by Washington Redskins senior vice president of player personnel Doug Williams.
Toward the end of the contest when Wall, who is recovering from a pair of season-ending surgeries, was asked by a reporter to give a percentage on how he feels, he was curt: "I have no (expletive) idea."
"I haven’t even tried to run or jump yet," Wall said.

In comments to The Sports Daily on Sunday, Wall said his rehab was going well, but didn't provide a great deal of specifics as he enters the fourth month of his recovery.

Wall wasn't certain what the next steps of the process might entail, "whatever the trainers want me to do. Step by step whatever the trainers all me to do,” he said.  “After the tendon heals all the way it is all about getting my leg strength back so I can run and bend and do all those type of things.”

"I’m on the verge of getting my leg strength back. In the pool, swimming, stuff like that,” Wall said about the activities he is doing now, mentioning leg press and calf raises specifically.

And while it is clear he is no longer in a walking boot, which he sported at the end of the Wizards season, he was seen walking around the court with a slight limp or hitch.

For those asking, here’s John Wall walking out of the arena. Slight limp/favoring. All together, good to see. #DCFamily @NBCSWizards-- pic.twitter.com/6Yusx9FLJ9

Prior to undergoing his second operation, Wall spoke defiantly about how he expects to return.

“All the people that talk negative, like, 'You can't come back from it. You not this, you not that...' That (will) do nothing but motivate me even more," Wall said in February. "'Cause (those) are the same people who when I was on top, (were) respecting me and loving me."

"The people that show you that love, love to see you fall. Why not use it as more motivation? They ain't nothing to dwell on," Wall said.

Also, there appears to be something under Wall's sock on his right leg. (Wall underwent two surgeries on his left leg earlier this year.)

While Wall is working on a return, the Wizards have yet to name a successor to Ernie Grunfeld after they fired their longtime team president and general manager on April 2. Nuggets president of basketball operations Tim Connelly declined an offer from the Wizards, but there are rumors Raptors team president Masai Ujiri could be a candidate.

The Mystics defeated the Wings, 86-62, thanks to 21 off the bench from former Maryland standout Tianna Hawkins and improved to 4-1 on the season. The Mystics' next home game is a rematch of last season's WNBA Finals as the Seattle Storm visit Friday, June 14.
Follow Ben Krimmel and 106.7 The Fan on Twitter.