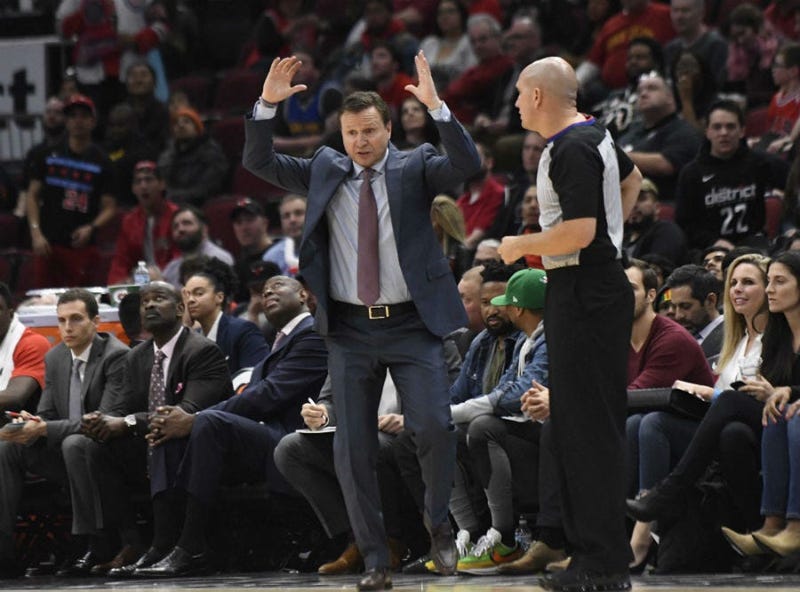 They say this too shall pass.

And thankfully for fans of the Washington Wizards, the 2018-19 season will end after 82 regular season games. With the Miami Heat's win Thursday the Wizards were officially eliminated from playoff contention.

Our long DMV nightmare is over.

A season that saw John Wall suffer not one, but two season-ending injuries, new signing Dwight Howard play nine games due to butt and back problems, new signing Austin Rivers shipped out in December with former first-round pick Kelly Oubre for a 33-year-old Trevor Ariza (after the Wiz bungled the trade the night before which was hilariously lampooned on Grant & Danny), the team went through a stretch of always losing games on Friday, former first-round pick Otto Porter Jr. was dealt prior to the deadline to the Bulls, and Markieff Morris was also sent away, too. And, meanwhile, Bradley Beal is having another stellar season and has nothing to show for it save a 31-45 record and lots of more miles on his legs.

Did we miss anything? Troy Brown Jr. the team's 2018 top selection in the draft? He's hardly played, that too.

Of course, everyone remembers what Wizards owner Ted Leonsis said before the season, right?
"Well, we want to make the playoffs," he told The Sports Capitol. "We want 50 wins and I’d like to set a bar that says if we can’t get by the first round and the second round then we didn’t meet our goals. We have to improve upon last year."
None of that has happened. (Leonsis, also, said the Wizards wouldn't trade Porter. That did happen.)

Just thinking about all of that makes you want to lay down, doesn't it?

And much to the dismay of 106.7 The Fan's Danny Rouhier: Ernie Grunfeld remains general manager.

The Wizards are officially eliminated from playoff contention. Please be true to your word & demonstrate some accountability. It’s long over due. Give the few remaining fans a glimmer of hope. Do it today. #FireErnie

Who can forget in February when Rouhier said: "This is embarrassing... It's lunacy. Everybody that is smart takes advantage of the dumb Wizards and the dumb GM Ernie Grunfeld, who should be fired immediately."

In January he said about Leonsis: "Everyone wants you to fire Ernie Grunfeld because he should be fired."
Or from December: "I am out until he’s gone. They don’t deserve our attention. ... I’ll be back when he isn’t here, ruining everything #FireErnie."
And, sure why not, November, too: "Fire Ernie Grunfeld, it's the only acceptable thing to do. Blow this group up because they hate each other and it's not fun to watch. Start anew."

However, after a loss to the Heat earlier in March, Leonsis gave some indication changes may come.

“We’ll have to figure out what to do in the offseason,” Leonsis told NBC Sports Washington.

But who knows what exactly the offseason moves will be.

Seventy-six games down, mercifully only six games remaining for the Wizards.