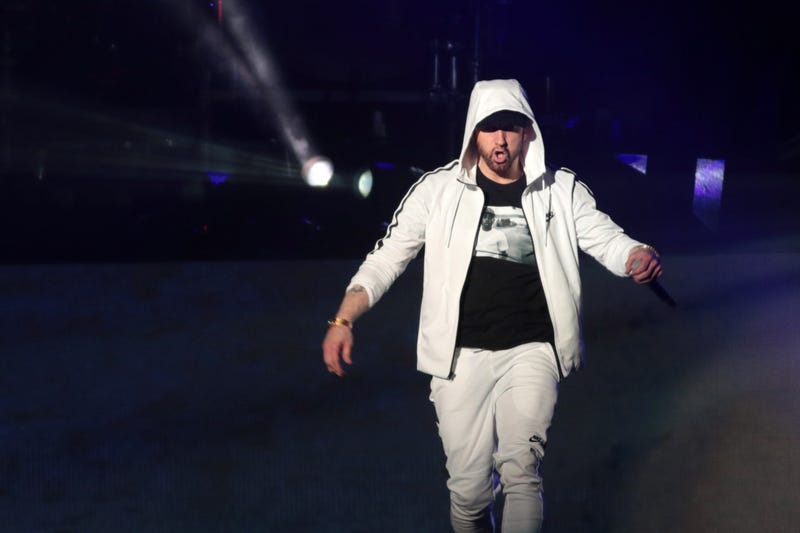 New Wizards guard Austin Rivers has weighed in on the rap beef between Eminem and Machine Gun Kelly, saying the former's "diss was better" but with an important caveat.

"I'll say this. Eminem's diss was better," Rivers told 106.7 The Fan's Chad Dukes and Thom Loverro. "But MGK's song's much more entertaining to listen to. He had a better song. I was very surprised and you have to give respect for MGK for going at him.

"It's tough, man. Eminem's like one of the best lyrical rappers, but we live in a day and age where that lyrical rap isn't popular. People just want good beats, so, it's like, I could see the frustration there."

Machine Gun Kelly hammered Eminem last month with devastating blows like "his f***ing beard is weird" in "Rap Devil," which was a better song for any reason but its lyrics. Eminem responded with "Killshot" 11 days later. It was everything Rap Devil wasn't – a vintage Eminem lyrical massacre and anything but a song made for radio.
Rivers doesn't have to look far to find someone who appreciates rap for the lyrics; Wizards teammates Bradley Beal and Otto Porter share the preference.

"The age of lyrical rap is dying and that's why you have rappers like J. Cole come out saying things," Rivers said. "Guys who (are) really, very lyrical and know how to write music or freestyle well, they get frustrated because now the top-10 hits on the Billboards are all songs that people dance to or have a dance thing. You know what I'm saying? The more ridiculous, the more it sells."

"It's just the age of social media in general," he said. "It's like if you say something stupid or you act stupid, you get followers. It's dumb. That's why I don't really like social media to begin with, but it is what it is."

Rivers is launching a podcast called "Imma Go Off" for LeBron James' Uninterrupted website. Just coming up with a title for the show caused Rivers more societal strife.

"It was gonna say 'say what you feel,' and then they changed it because I want it to be a more raw version of a podcast and not like the stereotypical vague answers that, like, players give," he said. "Because in today's day, no one wants to say anything without starting... anything."