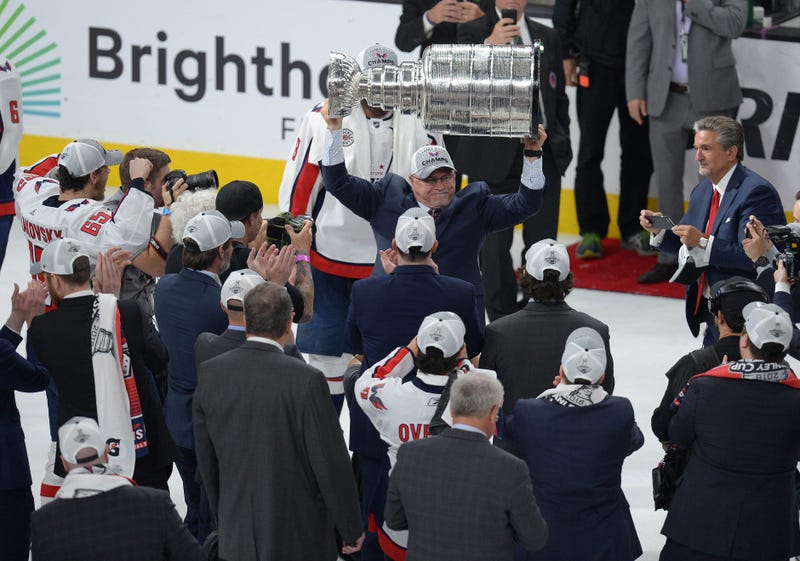 The Capitals received a special visit before Monday's game against the Islanders.

In walked the opposing team's coach, Barry Trotz, alongside former Caps assistant Lane Lambert and goaltending coach Mitch Korn, both of whom are now on Trotz's Islanders staff.

The first opportunity to pick up his Stanley Cup ring, Trotz made the visit count.

"All summer I've wanted to say this, we f*cking did it," Trotz told the Caps in the visitor's locker room. "Four years of great f*cking memories, great memories. The work you guys put in, the friendships that we've made, the incredible things that we did together – that lasts a lifetime."

"I am looking forward to a couple things," he said. "I'm looking forward to the reunions and all the great stories. The one thing that you guys said – and I said it today to the media – you guys have been so resilient as a group over the years. The pressures in that were real, and you fought through that and that's the most proud I am of you guys. We were resilient f*cking champions."

"And I think Osh and you guys said it – you can do it again, too," he said. "You'll have to go through the f*cking island, okay? But you guys can do it again. And I sincerely say that. And I don't know how to thank all of you guys. I'm going to try to do the same thing on the island. We've got lots of work to do to hopefully have the same memories on the island as I always will with you guys.

"Thank you, the players, the training staff, coaches, all the work – a lot of work goes in – and there's such a big investment to winning and you guys made the big investment. That is... it's worth everything, and I know it does to everybody and it does to me. And, uh, I'll die a happy man."

"Last thing I want to say," Trotz added. "I'm sort of speaking for most guys. It's going to be really hard to not like you guys, it really is, because you're always family."

Three coaches walk into a locker room, all three walk out with #StanleyCup Rings. Thanks for everything Barry, Lane and Mitch. #ALLCAPS pic.twitter.com/7X8j1EfzXz

Thanks for everything Barry, Lane and Mitch. #ALLCAPS