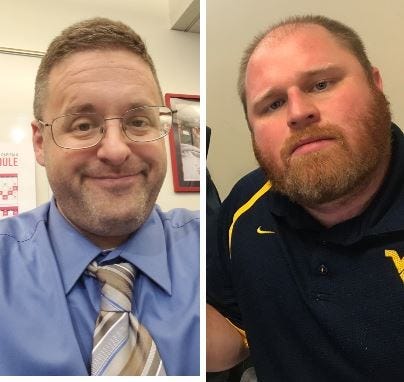 With Chad Dukes and JP Finlay sitting alongside, Chris "Blue Shorts" Lingebach and Chris "Rooster" Russell lobbed verbal grenade after verbal grenade at one another Tuesday in a radio brawl that needs to be heard to be believed.

The war of words stemmed from a mistake Russell made while hosting "Overtime" Monday evening. As the news broke that Scot McCloughan had lost his grievance case against the Redskins, Russell told listeners McCloughan had, in fact, won the case. (Listen to the gaffe, and the subsequent apology, here)
The mistake brought Blue Shorts to tears. No, not tears of sympathy. Tears of unbridled joy.

This is the happiest I have ever seen @ChrisLingebach pic.twitter.com/JPzcFlJKJn

Russell took exception to Shorts' reaction to his error, and thus a good old fashioned Twitter war began. (It should be noted: this is not the first time a 106.7 co-worker has taken exception to a Blue Shorts article.)

Want to thank @ChrisLingebach & I'm sure what is to come in PM drive for all of their support. Very nice of you guys to have my back, after making a mistake. Hope you all continue to be perfect. https://t.co/fHI37ul7FG

Very true. Hard to ignore. Just wanted to expose an individual for how cruel they can be. Thanks @UnfamilrThought !

so are you owning the mistake, or are you over that and have just moved on to embracing other people's sympathy? just curious.

This all preceded what happened during the final segment of Chad Dukes vs. The World Tuesday evening, as Dukes gathered the pair in studio to hash out their grievances on air.

And boy, was there some hashing.

To try and sum up the epic battle, Russell spent the beginning of the fight on the defensive, rejecting Shorts's claim he had read the news wrong because of his subconscious desire to pan Redskins president Bruce Allen.

But then "The Rooster" switched to offense.

The shots didn't stop there.

Shorts: He's so playing the victim card! Think about how stupid this is: he screwed up, somebody wrote about it, now he's a victim? How does that happen? In what logical or emotional world is that okay?
Russell: You know what, Shorts? When your show is on at 7 o'clock in the morning on Saturday and nobody's listening, I'm gonna fricking transcribe every mistake.
Shorts: Go ahead, pal. Go ahead. My profession is to write blog posts, which is what I did last night. And yours is to be sensitive on the radio and get pissy.

In the end, Dukes declared, "I think that we found resolution, and I'm happy we were able to get down to the bottom of it and broker a truce."

Russell, who hosted "Overtime" again Tuesday night, finished with this parting thought: "I'll try not to screw up as badly as last night to give Blue Shorts something to write about tonight."

Well, thank you Russell, and Shorts too, for giving me something to write about on Halloween.