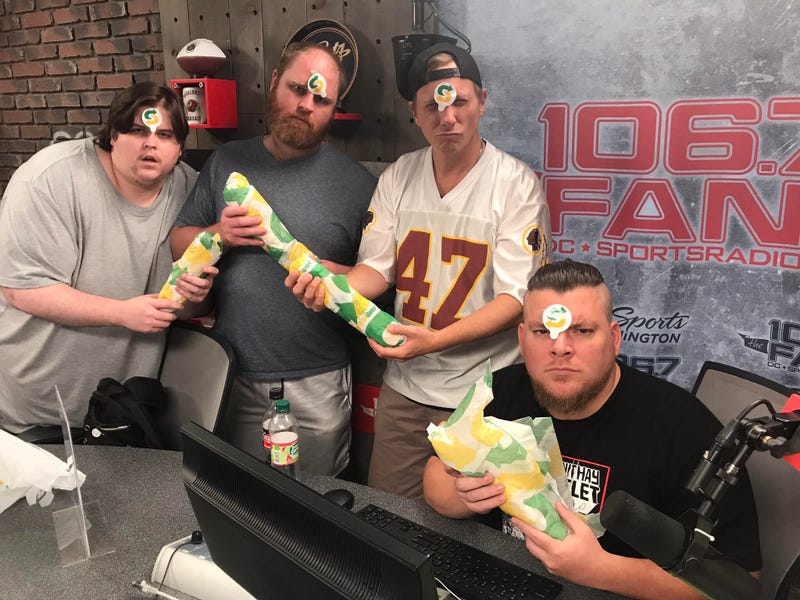 Chris Thompson's comments on the poor attendance at the Redskins' home opener Sunday not only sparked intense Twitter debate, but launched a civil war at 106.7 The Fan on Tuesday.

Monday afternoon, Chris "Blue Shorts" Lingebach wrote an article on what Thompson said, writing the running back called out Redskins fans. Thompson did not like that characterization, letting the world know his displeasure on Twitter.

I hate this headline honestly. Read the article. I won’t get into a Twitter war but if you think I would just “call out”/bash the fans then you clearly don’t know me and it’s a shot at me as a person. https://t.co/uXLdNhF50Z

Redskins Twitter soon exploded, many coming to Thompson's defense at the perceived slight, criticizing Blue Shorts and the station. Others went after Thompson and the Redskins for not playing better.

@ChrisThompson_4 was the only player to stay late for autographs the day we went to training camp. He's the last person to be putting in a bad position on this. Shame on you @1067theFan pic.twitter.com/pirwSA7v9Z

I’m guessing fans know you and know you wouldn’t do anything like that. I guess it’s a lesson learned not to give another second of your time to @1067theFan

Fans don't enjoy booing either @ChrisThompson_4. We know your level of effort never deserves a "boo", but you have to admit, yesterday was bad. If I'd spent a weeks pay to go the season opener & witnessed that game in person, I can't say I wouldn't have been booing too.

@ChrisThompson_4 I didn't like the empty seats either or the booing. But when you travel 2+ hrs driving to and 3+ hrs driving home and spend the money we do for tix & parking (9yr tix holder here) WE DESERVE BETTER THAN WHAT HAPPENED YESTERDAY!

The anti-Shorts multitude included Chad Dukes vs. The World producer Landfill, who announced on air he sided with Thompson.

Enraged his co-worker and fellow "Meatball Boy" did not support him, Shorts went on CDVTW Tuesday afternoon to hash it out with Landfill.

It quickly turned into an all-out brawl of words, neither Shorts or Landfill holding back their fury.

Here's just one of the several heated exchanges:

Landfill: He's an athlete, all we want is for an athlete to occassionally say something interesting. And as soon as he does it, you and everybody else, you and all of the other miserable bloggers in the world, jump on the guy constantly, because he said something vaguely interesting. Then I go on the air and for freaking two seconds out of a four and a half hour show I say something, and you act like a child for two days. Grow up!
Shorts: I'm sure I need to grow up. Hey, do you still live with your parents? Just asking.
Landfill: Keep still living with a girlfriend that you're only with because she pays for an apartment, because it has a basketball court!
Shorts: So who needs to grow up? The guy who lives with his parents, or the guy who doesn't? I'm just asking.
Dukes: It is getting real personal.
Shorts: Well that's what he's doing!
Landfill: You're a keyboard tough guy, Shorts.

Shorts: You don't care about context, you don't care about nuance. You just care about taking a cheap-ass shot at your co-worker on the air without thinking about the repercussions, because you have nothing that matters to you in life.
Landfill: Look, if you can't handle some people saying mean things to you on Twitter, just stick to tweeting Nats updates.
Shorts: Alright, pal. Alright. You're tough. You're so tough. You're tough, Mullins.
Dukes: I would ask you—
Shorts: Mullins could use some followers, by the way — Landfill. You guys could follow him. He's got about 40.
CDVTW Twitter was divided on who actually "won" the fight, some siding with Landfill, others Blue Shorts.

@chaddukes Can you fire @ChrisLingebach for harassing @Mullins1067 and use his salary to fund the Fast Food Piñata?

However, all agreed the segment was some incredible, can't miss radio.

@chaddukes this is amazing and you’re hilarious for letting it go on. I just want to point out that Landphil has 1,000+ followers not 37 #blueshortsfakenews ----

@chaddukes I love the show, but this right here, this needs to be added as a weekly segment. Let these 2 go for it for 10-15 minutes. LOVE IT #CDVTW

@chaddukes Blue Shorts, Landfill were killing me today, although Shorts may have been right, when you lose it you lose. But Dukes, Shorts, Fill, fantastic show!

You can listen to the entire "Shorts vs. Mullins" fight in all its glory below: