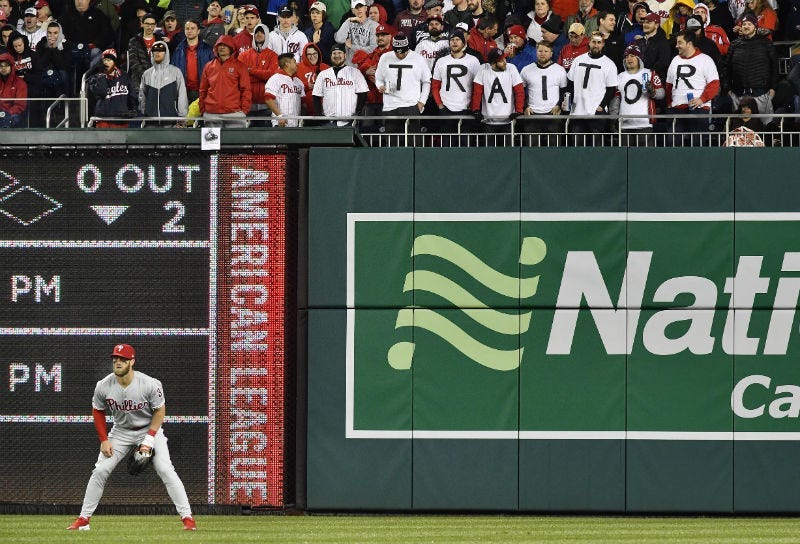 Nats fans only booed Bryce Harper Tuesday night "because they are small people who wanted somebody to boo and that makes them feel better," says ESPN's Bomani Jones.

Jones and his "High Noon" co-host, Pablo Torre, were in the midst of a discussion about Harper's return to D.C., during which the Phillies slugger was hailed with boos from the home crowd all game long – every at-bat, every stroll out to right field, every instance his face appeared on the scoreboard.
Harper would get the last laugh, finishing the game 3-for-5 with a single, a double and, last but not least, a 458-foot two-run shot he planted into the second deck in right-center, the origin of the most severe of those boos (where Harper plays in the field). Plus, the Phillies dominated, 8-2.

"I liked it because I like Bryce Harper as a wrestling heel," Torre said. "I want more Bryce Harper calling for the boos to his ear. ... I want the bad blood. I loved this."

"But he's only the wrestling heel because they booed, right?" Jones countered. "Like, you're saying you like it because he's a heel. They made him a heel by booing."

"(The Nats) were offering him a contract with deferred money out to 2072," he continued. "Everybody with any observation here recognizes that he left because they didn't really want him to be there. So, what is it that people are booing?

"What has happened is people believe that this is just what you're supposed to do, it is just supposed to be part of the fan experience, and, as a result, they booed him just because they are small people who wanted somebody to boo and that makes them feel better."

“They booed him just because they are small people who wanted somebody to boo and that makes them feel better” @bomani_jones on Bryce Harper getting boos from Nats fans in return to D.C. pic.twitter.com/ACDPhYvAwV

That's... a take. One that blindly ignores the emotion of fandom in favor of reason, in this case the seven years' worth of impassioned fandom Harper helped build here in Washington.

Tuesday night was an emotional release, which defies logic or contract details, a clear message from Nats fans that, of all places, you had to choose the one we detest the most, and we won't be forgiving you for it. Sure, you did what you had to do because obvious financial reasons, but this is how it's gonna be for the next 13 years. Results be damned.

That doesn't make them small; it makes them human.