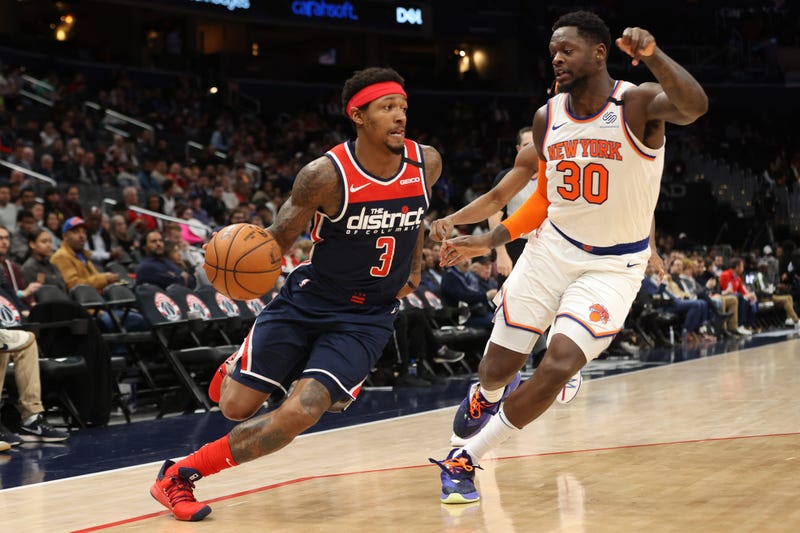 The Washington Wizards may be without their top player when the team returns to NBA action later this month in Florida.

Bradley Beal said Wednesday he is still undecided if he will play when the Wizards season restarts on July 30.

"Definitely, it’s more or less going to be a decision that comes down to the medical staff and I, just because of our precautions and coming back from being 0 to 100, then I have some nagging stuff at the end of the year we’re trying to clean up,” Beal said in a conference call with reporters.
The 27-year-old guard said he is working out and preparing every day as if will join the Wizards (24-40) in Orlando but hasn't made an official decision either way. And according to The Athletic's Fred Katz, did not indicate which way he’s leaning right now.
And if the Wizards' star does not return to complete the final eight regular-season games (and any possible playoff games), this could spell the end of Beal's time in Washington as trade rumors continue to swirl.
The Wizards have some options if Beal joins Davis Bertans in skipping the remainder of the season. (The Wizards announced this week John Wall, who did not play during the regular season, would still not play in the restart.)

If Bertans AND Beal don't play, the Wizards' team in Orlando will closely resemble the one they had in the Las Vegas Summer League last July. Hachimura, Wagner, Bonga, TBrown Jr, Schofield, Pasecniks, Mathews were all in Vegas.

Beal added Bertans contacted him before he announced his intention to not play. "He explained it and just seeing where he comes from, seeing his situation and understanding what’s at stake for him in his future, 100 percent I understand it," Beal said.

When Bertans decided to not participate, the Wizards supported his decision. "As an organization, the Wizards are fully supportive of his decision to stay back from the league's 22-team restart and remain determined to sign him in free agency, sources said," per ESPN.

Beal also addressed whether he believed returning to play would detract from the player's activism, especially as many can be highly visible leaders in the Black Lives Matter movement.

"I feel like we stopped playing basketball because of COVID. We didn't stop playing because of social justice," he said. "And I feel like we can still raise that awareness. We can still bring attention to what's going on in the world by using our platform, by utilizing the names on the back of the jerseys, doing it until people get pissed off and get tired of seeing it."

Bradley Beal says he doesn’t believe the NBA will distract from the fight against social injustice: "I feel like we stopped playing basketball because of COVID. We didn’t stop playing because of social justice. And I feel like we can still raise that awareness.”Full quote: pic.twitter.com/XbvKPne4CZ

During the call with reporters, Beal reiterated the story he told during the Wizards' Juneteenth march that after a police officer (who pulled Beal over a few years ago for having tinted windows) found out he played in the NBA, Beal says, the officer told him, “I can arrest your ass right now and f--- up your headline and have you on SportsCenter on Monday.”

380 words from Wizards star Bradley Beal that you have to read about a traffic stop on Interstate 495 in the DC area a couple of years ago. pic.twitter.com/SSohfgsV2t

Beal ended the call a message about COVID-19: "Wear your mask!"