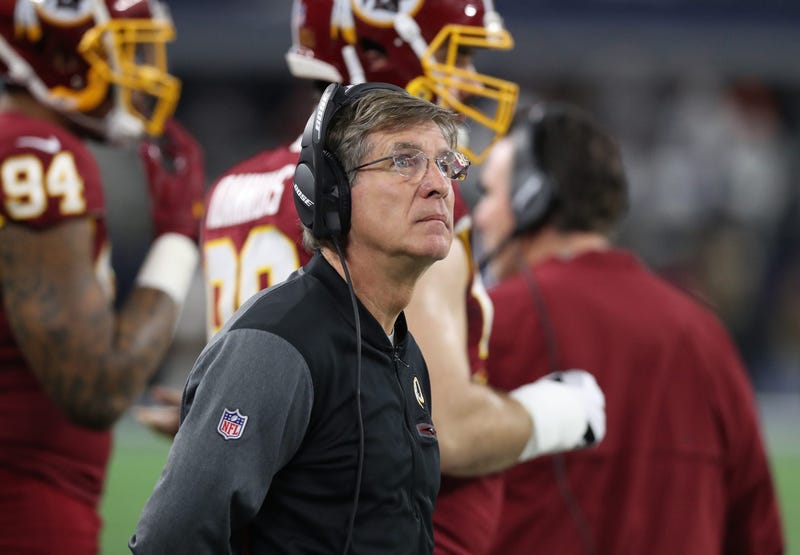 When the Redskins win or lose, head coach Jay Gruden shoulders much of the praise or blame each week.

But for Brian Baldinger, assistant head coach/offensive line coach Bill Callahan deserves credit for how well Washington's offensive line held up in the Redskins' 16-3 win over the Buccaneers Sunday, despite being without three starters.

"You gotta credit Bill Callahan and the offensive staff to plug in three players like that on the offensive line and still squeak out 16 points," Baldinger said to The Junkies Tuesday.

"This has happened before to the Redskins, they just get ambushed with injuries. But to go down to Tampa and do what they did, it's a great win. They stay on top in the NFC East, you just got to find ways to get wins with, really, a fractured football team."

The Redskins lost guards Brandon Scherff and Shawn Lauvao for the season last week, along with wide receiver Paul Richardson, and tackle Trent Williams remained out Sunday with a thumb injury.
Washington was forced to quickly sign three new offensive linemen, and one of them, Jonathan Cooper, got the start in Tampa Bay at left guard.
"They picked up Jonathan Cooper at the bus stop on Wednesday, and he started," Baldinger said. "They've lost three great players up front, yet they still found a way to get 16 points."

Newly acquired #Redskins LG Jonathan Cooper impressed me in his debut. What stood out most was how active he was in looking for work when he wasn't occupied. DT works to the LT here, so Cooper passes him off and works back inside to help the C pic.twitter.com/zrGVfHhIN6

Baldinger also praised the Redskins defense for bending but not breaking against the Bucs, holding Tampa Bay to just three points and forcing four turnovers.