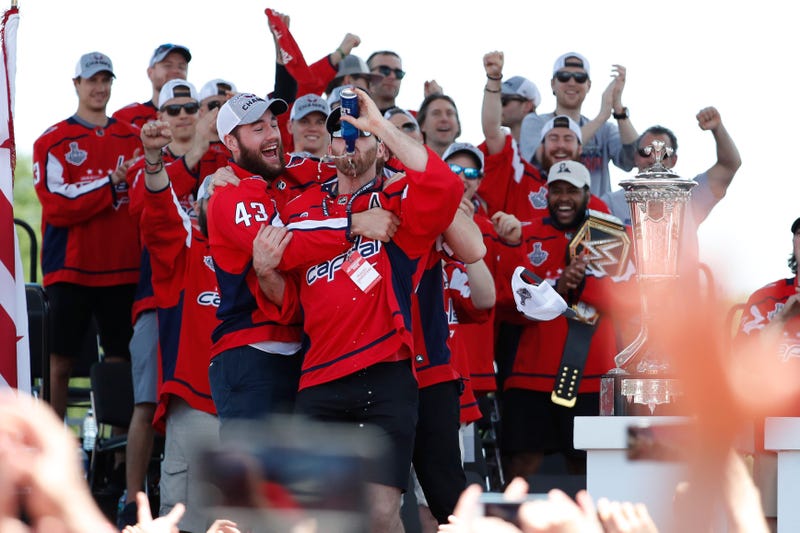 Brooks Orpik is the only returning member of the Washington Capitals roster that has defended a Stanley Cup title.

His first opportunity came after winning a championship with the rival Penguins in 2009. Now he gets to do it again nine years later.

Except, it almost did not happen. If at least one team or others had their way, Orpik would not be back with the Capitals.

Orpik was traded along with Philipp Grubauer to Colorado shortly after the Caps' title run in June. It was a deal heralded by many in the hockey world as brilliant by General Manager Brian MacLellan.
Not because "Mac" wanted to give Orpik up, but because dealing the 37-year-old defenseman freed up $5.5 million in cap space. The move allowed the Caps to bring back key players, like John Carlson, Devante Smith-Pelly and Michal Kempny.
Colorado, soon after, bought out Orpik's contract at his request, and because of a healthy relationship between Orpik and Avalanche GM Joe Sakic, Orpik became a free agent.

Offers came rolling in, but Orpik chose to return to Washington because "family-wise," Orpik told 106.7 The Fan on Tuesday, it was "where we kinda had to be."

"I can't really talk about much to be honest with you. It's kind of like an agreement with the league that I'm not really allowed to talk much about it," Orpik said, citing an NHL investigation into the matter that MacLellan first brought up last week.

"There was a lot of stuff behind the scenes that didn't really have much to do with hockey that factored into me coming back here," Orpik answered honestly. "Mine was more a family decision, more than it was a hockey decision. That's something that I kind of had to talk to the league about."

"Financially, there was better opportunities in other places, but family-wise, this is kind of where we had to be for a couple different reasons," he said. "Obviously we like everything about the area and the team and the group of guys we have here. Hopefully it worked out for the best here. We'll see. I guess that'll play out. This is kind of where we wanted to be and both sides made it happen."

Orpik and the Caps looked guilty on the surface, but after a thorough investigation, which included documented proof on both their parts, the NHL was finally convinced there wasn't a nefarious plot to return to Washington at a cheaper cost, circumventing the hard salary cap the league employs.

"They put us through a tough questioning," MacLellan told reporters. "We did everything above board and we answered the questions honestly. There was no repercussions, so I think we're good."

Both the Capitals and Orpik feel that the controversy was initiated by another team, if not multiple teams. "I would assume there are some teams are involved," is all MacLellan would allow.

The hunch here is that the Penguins were one of those teams. Perhaps former head coach Barry Trotz and his new team, the Islanders, were as well?

Either way, Orpik is back in Washington despite not seeming entirely comfortable with the fact that he was traded in the first place, after playing every game in the playoffs and racking up a +17 to lead the NHL.

Orpik played in 81 regular-season games last year, and he'll likely be paired with the young but talented Christian Djoos, who he was paired with during the Caps' Stanley Cup Playoffs run.

"He's super humble. At the same time, he's pretty confident in his abilities," Orpik said of Djoos. "He doesn't really show that, just cause of the kind of a guy he is. For a young guy, he does stuff with the puck that you really can't teach. Especially patience. Usually with younger guys, they get it and it's kind of a hot potato – they just want to get rid of it right away."

It might be the last run Orpik has in the NHL, despite receiving some multi-year offers. But he says going "year-by-year is preferable," because he doesn't want to feel an obligation or commitment to more than just the now.