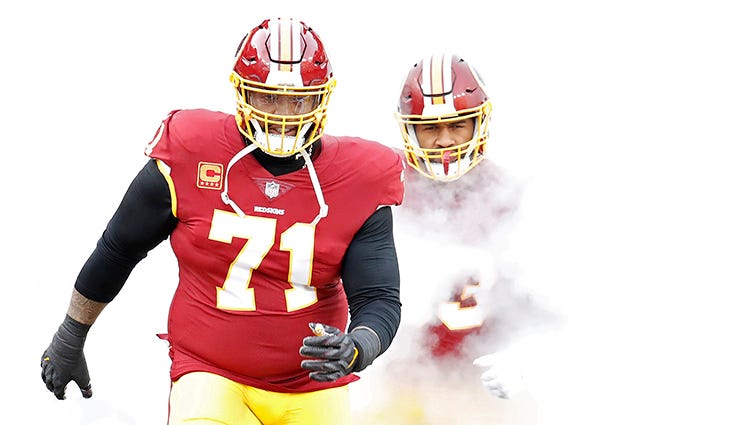 When asked if he meant play specifically for the Redskins or if the team had considered trading him, Allen said, "No, it will be with us."

"We had a surprising retirement this week in the NFL," Allen added, making reference to Colts quarterback Andrew Luck, "and I don't see Trent retiring."

Retirement was not something ever mentioned when it came to Williams until the Redskins president's comments.

Later Thursday, former Skins DeAngelo Hall said on a podcast he spoke to Williams and said the tackle won't be returning to the team.

"I had to text him: 'Hey bro, let me know before you show up so I can report it first.' And so I reached out to him, and he's like, 'There's zero chance I'll be in that building next week.'"

MORE: Williams has told friends he's prepared to sit out the season
These are Allen's first comments about Williams since he spoke at the beginning of training camp in late July.
When asked by Burruss if he could confirm Williams had a grievance with the medical staff or if it was a contract issue, Allen said he wouldn't get into specifics.

"You know, I'm not gonna go into any conversation I have with a player. He's told me his thoughts, but we're now in Philadelphia mode and it's time to get going," Allen said.

Allen then declined to answer even when was the last time he spoke to the wantaway tackle, "Well, as I said, I'm not going to talk about my different conversations."

The Redskins team president gave no indication the standoff would soon come to an end and indicated the Williams isn't in the team's plans.

"You're either here or you're not," Allen said. "And he's elected not to be here."

"We are in full mode, right now, even before (Thursday's final) preseason game, preparing for Philadelphia," he said.

"I THINK TRENT'S GONNA PLAY FOOTBALL"#Redskins team president Bruce Allen goes 1-on-1 with @SherreeBurruss to talk about the latest with Trent Williams' holdout. Tomorrow, Allen talks about Jay Gruden's job security as well as his own, only on @nbcwashington pic.twitter.com/B14C09rDdp