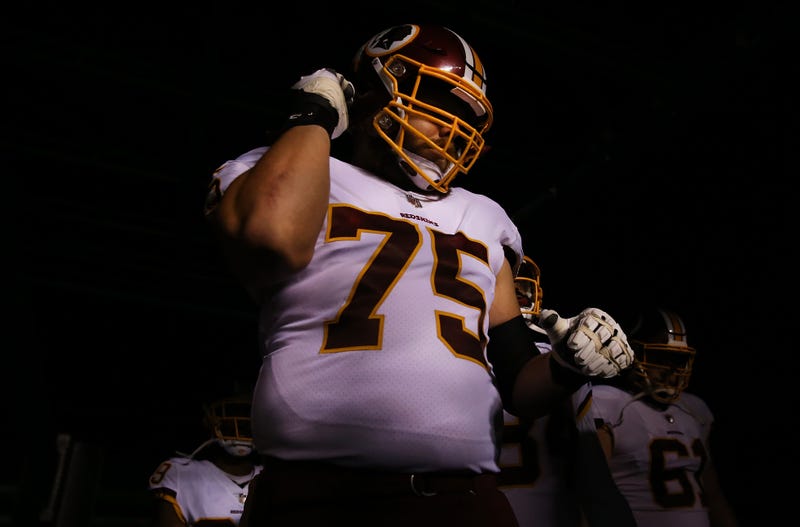 The offensive line has been shattered for the second straight year. The only true deep receiving threat was lost, too. Meanwhile, two other offensive linemen are hurt. An inept offense that struggled all season is now down seven prominent players.

Not the way you want to enter the season's second half.

Basically, center Chase Roullier is the only healthy lineman and tackle/guard Ty Nsekhe the sole prominent reserve. The rest are newbies and backups with Gruden expecting to also play street free agents as yet unsigned.

Sounds familiar? It happened last season and a promising team finished 7-9. While the Redskins reached this season's midpoint at 5-3, the best ever in Gruden's five seasons, their postseason chances suddenly dropped faster than the stock market since tariffs on China.

The Redskins offense was already sputtering. How are they supposed to survive losing Scherff and Lauvao? Oh, Gruden's right to say they'll soldier on because there's no other choice, but Sunday's constant holding penalties and failure to stop a bad Atlanta defensive front seven does not bode well for the coming weeks.

Sorry, Adrian Peterson – the recruiting promises made by Williams in August had a limited shelf life. The running game is probably closed for business. Quarterback Alex Smith can't shoulder the offense himself, but the line won't have much room for Peterson to muscle past for significant yards.

The Redskins need to rely on their defense to win anyway this season. But, no team can win regularly scoring less than 20 points per game unless it's the 1985 Chicago Bears.

Smith holds on to the ball too long. Now he'll have even less time to dump off passes. Opponents smell opportunity and they'll blitz Washington regularly until the Redskins patchwork offensive line can stop them.

Philadelphia suddenly likes its chances to win the NFC East a lot more. The Eagles only trail the Redskins by one game with two meetings to come. The defending Super Bowl champions are trending up while the Redskins are limping along. There may not be much left of Washington after playing three games in the next 17 days, before meeting Philadelphia on Dec. 3.

It's a shame. A healthy Redskins would have competed for the NFC East. Now, their prospects are nothing but gloom, doom and kaboom.