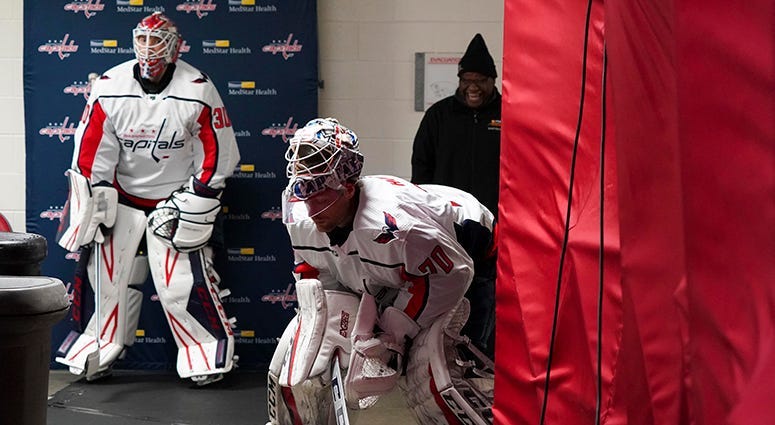 Strictly at surface level, everything appears to be going right for the first-place Washington Capitals, who still own the most wins in the NHL after 54 games.

But bubbling beneath that surface, coach Todd Reirden may be coming to a crossroads with deciding who's in net for the playoffs, a situation that's grown eerily similar to the one they were in as the 2018 Stanley Cup Playoffs neared.

Rookie Ilya Samsonov has been playing out of his mind for most of the season, while veteran Braden Holtby – the Stanley Cup champion goaltender – has struggled throughout 2019-20.

Even contractually speaking, it would benefit the Caps to find out if the 22-year-old's regular-season success can carry over into the playoffs. Braden Holtby is due to become a free agent after the season, and after re-signing Nicklas Backstrom, figuring out a way to bring Holtby back and renew Alex Ovechkin a year later seems very much like an impossible task.

"This probably isn't the most comfortable subject for you to tackle, but we gotta ask ya," 106.7 The Fan's Grant Paulsen recently prefaced to Caps winger Carl Hagelin during his weekly appearance, presented by F.H. Furr.

"Braden Holtby's struggling. And you've been in the league long enough, you've struggled I'm sure at times and never thought you'd get out of it, and everybody does.

"But what makes this unique is that Ilya Samsonov's been incredible," Paulsen said. "You've got a lot of people like me, and I love Holtz. I've got Holtz stuff all over my basement. He's a legend in this town. I'm not saying he shouldn't play again or he needs to be benched or anything.

"But I do want to see Samsonov play more to see if he can take this and run with it. As a player, what is it like right now in the locker room when one guy's struggling. It seems like when the other guy plays, he plays great, but hasn't really been asserted as the starter yet. And how do you guys make sense of all of that?"

Clearly a delicate issue, as noticed length of the exposition in the questioning. Hagelin treated his response with equal level of care.

"I think for us, I think any player, if someone's struggling, you try to help them out as much as possible," he said. "And like you said, I think it's one of those things in this league, sooner or later you're gonna get out of that funk. So as a player, you try not to think about stuff like that. That's up to the coaches, especially with goalies. I think they have a pretty good relationship with the goalie coach."

"I think it's more mental than anything when it comes to goalies," he said. "As a team, we're comfortable in both of our goalies. You know, Holtz has obviously proven that he can win the Stanley Cup, so we're not too worried about that. But we're fortunate to have two great goalies and we want both of them to play at their best."

That's a dodge. You can't blame Hagelin for it, as he doesn't stand to gain any benefit from serving up a fat soundbite there. No one on the team would.

The numbers reflect that Samsonov's obviously been the better goaltender. So the choice should be obvious, right? Sure.

Except that this is a championship-caliber goaltender we're talking about in Holtby, who was in every bit as much of a funk when Barry Trotz chose to start Philipp Grubauer over him to begin their championship run in that magical spring of 2018.

That and the numbers may not tell the whole story (not those numbers, at least), a point raised this week by Caps analyst Alan May to The Sports Junkies, revealing the true nuance behind this complicated riddle.

"If we looked at just charts and graphs, paper and didn't watch the game, we would say Samsonov's the goaltender," May said. "But there are charts, there are graphs, there are stats that show the quality of shots that Samsonov has faced compared to Braden Holtby. There's been so many breakdowns, because Braden's played more games, in front of him."

"If you look at the shot charts that they have, they keep heat graphs on where the quality of shots are in the National Hockey League, where the goals are coming from," he said. "Braden's faced way more in the heat map. The heat map is below the hash marks, directly in front of the crease, one-on-one, no one there defending, defensive breakdowns. Braden's faced that."

"They're in first place and we're picking this guy apart," May went on to say of Holtby. "He's got 20 wins and people are picking Braden Holtby apart. Could you imagine that?

"They go, 'Oh, they're scoring more goals.' You know what? Everyone's scoring more goals right now," he continued. "And Braden Holtby hasn't cracked, he hasn't ripped his team to shreds. He's got 20 wins under his belt."

"Braden hasn't complained," May said. "He's supported Samsonov the entire time. He's an excellent teammate, he's an excellent person and he's just gonna improve. This is crunch time for him right now and the team's gonna come together, and I think Braden will be the starter going into the playoffs. If he's here next year, I don't know, but right now, it's still Braden Holtby's team."

Just to demonstrate how divided people are on this topic, just last month May's colleague, Craig Laughlin, asserted that – at that time – he would still stick with Holtby, while also acknowledging that because of Samsonov's play, word was quickly traveling around the league that the Capitals could have another Grubauer-Holtby situation on their hands.

"It could come down right to the first game of the playoffs – Hey, who's in and who isn't? – and it could be Sammy," Laughlin said. "That's what I'm telling you right now."

At some point, some point soon, Reirden must decide whether the future starts now, or eight months from now.

Good luck, coach. The fate of your entire season hangs in the balance.