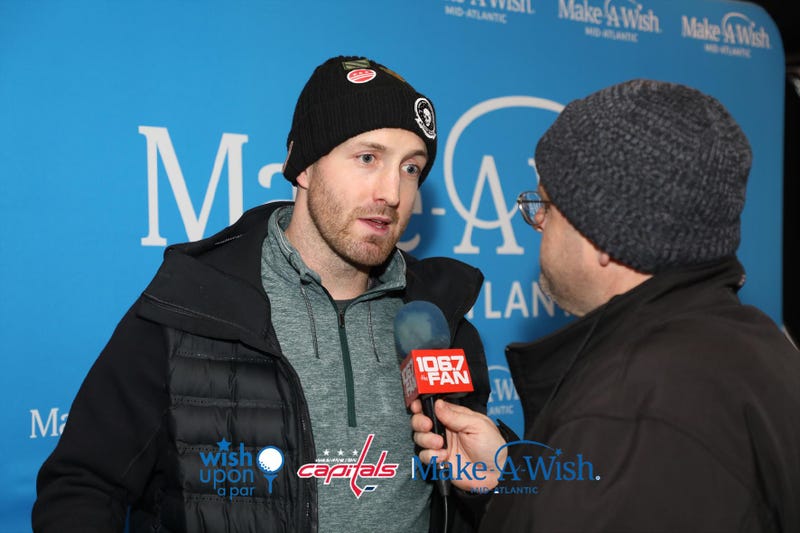 A blizzard blanketing much of the Mid-Atlantic could not stop Capitals defenseman Brooks Orpik from helping Make-A-Wish Mid-Atlantic grant more wishes to kids who are battling and recovering from the unthinkable.
Orpik and his wife, Erin, hosted Capitals fans and donors at their annual “Wish Upon a Par” event.
On Sunday afternoon, after a 2-1 overtime loss to Columbus on Saturday night, practice on Sunday morning and during a stretch of three games in four nights, Orpik and many of his Stanley Cup Champion teammates gathered at Top Golf near Redskins Park and One Loudoun to tee-off and raise much needed funds.

A concept that started in Pittsburgh – at that time a bowling event titled “Pens and Pins” – has taken flight in the Orpik’s new home, along with some bad golf shots from Capitals players, fans and donors to help “wish kids” that are looking for inspiration.

Kids like Nitin Ramachandran, who has beaten brain cancer after a tumor developed on his fourth ventricle, and is now in remission.

“I repeatedly say this. I credit Make-A-Wish as one of the biggest assistants and turning points in my recovery,” Ramachandran told 106.7 The Fan Sunday. “When I had my wish, I was pretty sick, bed-ridden and couldn't walk that well.”

Nitin's wish was to be a Washington Wizards player for a day. That helped spur his comeback.

“It really shows us that there is a hope at the end of everything and now that you have done something this tremendous, anything is possible.”

For Orpik, his comeback to the Capitals was in doubt after being traded to Colorado following the Stanley Cup win but eventually, he and his family landed back in the Mid-Atlantic region to play hockey and help.

“It’s turned out to be an awesome event. It gets bigger and bigger every year,” Orpik told me. He saluted his teammates for braving the snow, the schedule and supporting the “Wish Upon a Par” event when they didn't have to.

“It’s completely optional. There’s nothing mandatory about it. To get the turnout that we do from the guys on the team is awesome,” Orpik opined.

This is awesome! At @WishMidAtlantic Brooks Orpik "Wish Upon a Par" event, wish kids went to every #Caps player w/gift bags. @tom_wilso got his & said "oooh a sippy cup!" And then got a power handshake! #ALLCAPS #NHL @1067theFan pic.twitter.com/lS6eBChpVZ

For Orpik, it’s the time spent with his feet and skates on the ground that means the most.

“Let’s be honest. You need money to do things," said Orpik. "I think from an athlete’s perspective, I think cutting a check and then not doing anything to follow up – I think is the easy thing for us to do.”

“I think getting out there and organizing things, kind of developing relationships with some of these kids is what really sticks with you and is the most meaningful part of doing this kind of stuff. That’s always been important to me and it’s been a lot of fun."

The “Wish Upon a Par” event was on the eve of his 1,000th NHL game. He’ll take part in that Monday night at Capital One Arena against the St. Louis Blues on 106.7 The Fan.

“It’s definitely a pretty cool accomplishment. It’s not something I ever thought was going to happen," he said. "It will be exciting and especially after the way last summer transpired, getting to come back here and do it with this group, will be special.”