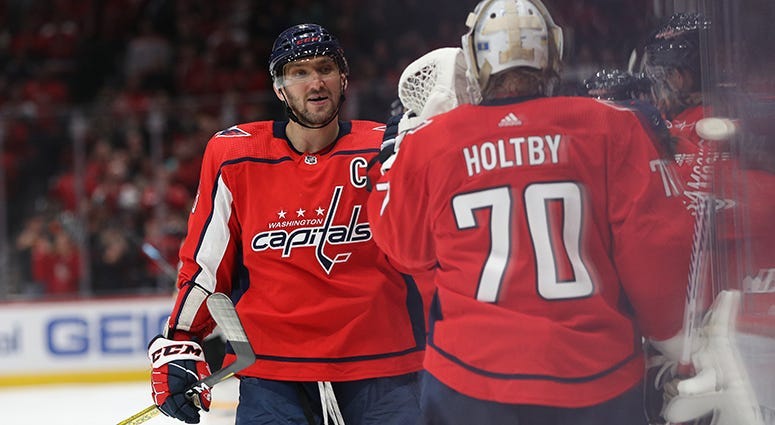 It's said so many times that it's starting to get tired, but the 2019-20 Washington Capitals are better than everyone else in the National Hockey League.

"It's in the makings of a special group," Capitals coach Todd Reirden told The Sports Junkies during his regularly scheduled appearance, presented by Sheehy Auto Stores.

The Capitals (24-5-5) are winners of eight of their last nine games and lead the league with 53 points, five points more than the next best team, the Boston Bruins, whom the Caps promptly dispatched 3-2 last Wednesday.

"Hey Coach Todd, let me ask you this, a very simple question. Okay?" Junkies host Jason Bishop said. "Why you is your team so good?"

"I like that question," John Auville chimed. "That one took hours to come up with, Coach!"

"I mean, can you break it down for me? I was thinking about it all night," said Bishop. "I just said, 'I got one question for Todd.' Why is the team so f'ing good?"

"Oh, it's been a good start, that's for sure," Reirden said. "Looking at the schedule to start the year, we didn't think it was gonna be an easy start to the season."

"If you looked at even our first 10 games, we spent a lot of time on the road," he said. "Had that go out west and take on all of California there last week, and we're finding ways to win. It's in the makings of a special group, of guys that believe in what we're doing. And you know what? We've got good players. So that, and a little bit of direction from the coaches and it's been working out so far."

The Caps have dominated the Bruins in particular in recent years, winners of 16 of their last 17 contests.

"You've outscored them 51 to 26 in that span. How does that sort of dominance happen?" asked Auville. "This is over a perennial playoff contender. This is not against the Detroit Red Wings. This is a team that can make the Eastern Conference Finals that you're beating up on with regularity."

"You know, I think a few years ago we were beating up on them, but we're not beating up on them anymore," Reirden said. "Every time we play 'em, it's an all-out war. We had to go to a shootout to beat 'em last time in Boston coming from behind, and then (Wednesday night) we were behind in the game and we end up... actually, we were ahead, behind, all sorts of different stuff going on, and then obviously get a huge goal from John Carlson."

"And then to me, the real difference make is Braden Holtby," he continued. "This, I have not seen, a goaltender play this well against one specific opponent night in and night out of us playing them. He's been our answer when we do have some breakdowns. It's something I haven't seen before against, like you said, against a team that's one of the tops in the league pretty much every year."

"You know, it really does come back to a little bit, the only thing that I can point to – and sure, you know like everyone knows each other's systems pretty well, and both of us have such success during the regular season playing a certain way that you don't totally change it going into your game that you're playing against that team – but I can just tell you that some of our players have confidence going into the game, that we've had a lot of success against them," Reirden explained. "Somehow we find a way to win, and the brain and confidence is such a big part of professional sports, and especially when you're trying to overcome a really talented team."