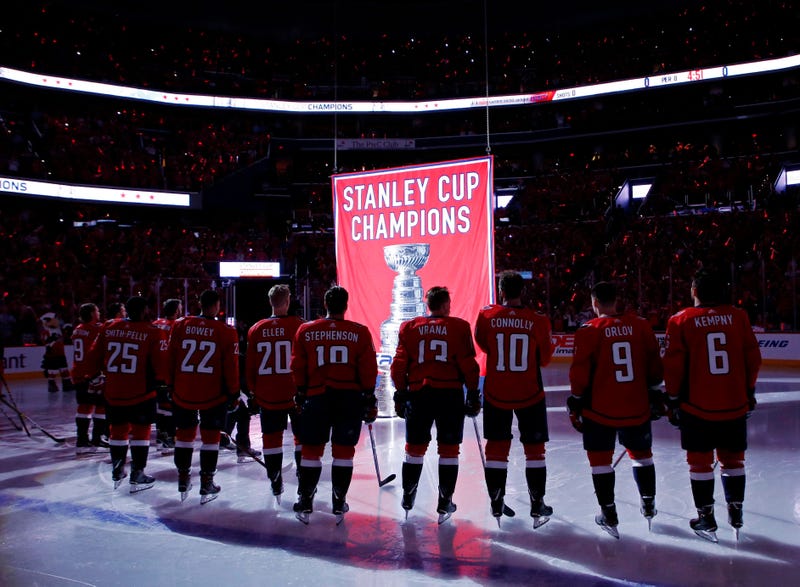 Everything about Wednesday night was wonderful. It was perfection.

A Stanley Cup banner raising ceremony that featured Alex Ovechkin skating the Stanley Cup out of the tunnel during player introductions and all over the ice.

How freaking cool is this! @ovi8 skated out with the #StanleyCup onto the ice! @1067theFan #ALLCAPS pic.twitter.com/wBA4WFqmXq

20,000 or so supporters of the Capitals singing along with Queen's "We Are The Champions!"

Want to hear what 20 K sounds like when they sing "We Are The Champions!" #StanleyCup #Caps #ALLCAPS pic.twitter.com/C42XoOwkm6

The banner going up to the rafters of Capital One Arena with a team group shot in front as the Stanley Cup was a special guest.

The #StanleyCup banner that many thought would never come to Washington D.C. @1067theFan pic.twitter.com/5I9OPDegIM

Two goals in the first 1:47 of the game, and another three-goal spurt in 3:11 of the second period.

A 7-0 shutout pitched by Braden Holtby and his teammates in game one of the season. It took the Capitals 100 games — Game 6 of the Eastern Conference Final, to be exact — to achieve that last year.

Everything was perfect, except for what happened at around 4 p.m. That was when Tom Wilson's egregious 20-game suspension was handed down by the NHL Department of Player Safety.
Wilson deserves to be suspended. There's no doubt about that. In this space Sunday night, we outlined his terrible history against St. Louis in the preseason and overall.

Wilson deserved at least six games, and probably eight to ten to send a message.

What he didn't warrant? A 20 MPH to 120 MPH ramp up in suspension length in the snap of a finger.

The Capitals pleaded their case with Wilson Wednesday morning, and their argument completely fell on deaf ears, leaving his teammates to clean up the carnage on and off the ice, because Wilson is not allowed to talk.

He is planning an appeal, according to Capitals head coach Todd Reirden.

His teammates were none too pleased with the suspension length.

"If I say what I think, they are going to suspend me too!" said Wilson's line mate Evgeny Kuznetsov.

Evgeny Kuznetsov on Tom Wilson 20 game suspension: "If I say what I think, they are going to suspend me too!" #Caps #StanleyCup #ALLCAPS

Kuznetsov apologized for not responding in better English to my question, but his point was perfect.

"It's a tough thing. We don’t agree with it. It's unfair," said Holtby. "It's not what they told us when they (NHL Player Safety officials) came around and talked to us about what's fair and what wasn't."

Wilson celebrated his team's achievement in uniform and on the ice, being introduced to loud chants of "Free Willy," but that could be the last time we see him on the ice until late November.

Wilson has two appeals available to him under the NHL collective bargaining agreement. First to NHL Commissioner Gary Bettman, and then further to a neutral arbitrator, but he must sit out while those are sorted out.

"I hope it's not going to be 19 (more)," captain Alex Ovechkin told reporters. "Maybe it's going to be less. It's hard to talk right now because I don't want to be a guy whose gonna step (out of line), but I think it's too much."

"It's unfortunate," T.J. Oshie said. "He's losing — he earned a nice contract, and now he's losing a quarter of that.”

For one night at least, there was no impact. Everything else was perfect. How long will that last? That's the question moving forward.