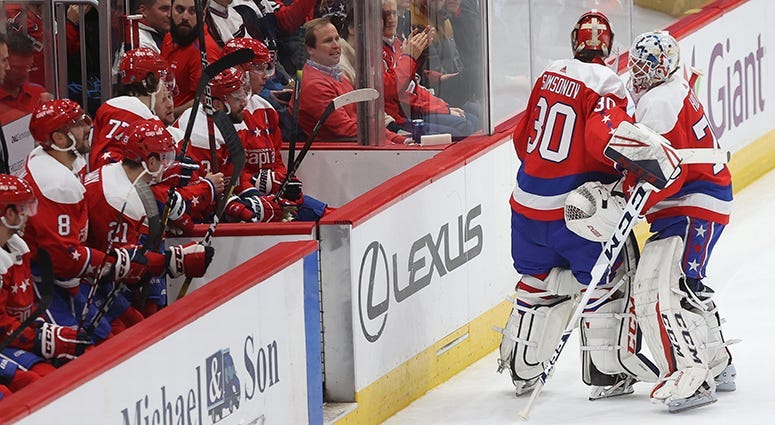 Braden Holtby is stuck in a rut that wasn't helped by the Capitals defense in his last start, when the Flyers scored seven goals before Holtby was mercifully pulled in the third period.

Holtby's teammates graciously claimed responsibility for the 7-2 loss, crediting the "crappy" defense they played in front of him. They weren't wrong, because they were still playing poorly the next game, leaving Ilya Samsonov to a similar fate when he was pulled after letting in his fifth goal midway through the second period of Washington's 5-3 loss to the Islanders on Monday.
"When you have games like that, do you go up to Holtby after the game, or do you stay away?" Lars Eller was asked during his weekly appearance with The Sports Junkies, driven by AAA.
"Yeah, I did. I did go up to Holtz after the game," said Eller. "What I said to him, I'll keep between him and me. Holtz is extremely important to this team and I know, I think most of us know what happened two years ago, when (Philipp) Grubauer kind of played very well during the season and kind of took over the starter job towards the end, and Holtz probably didn't feel great about himself."

"And then he comes in Game 3 in the Columbus series and that's when the whole thing turned for us and he played some of his best hockey all the way through the finals," Eller continued. "So we know what Holtz is capable of. He's strong mentally. He's no quitter. Even though he's going through a rough patch right now. But you can't pin that loss on him. We hung him out to dry and we've got to play better in front of him."

The fact remains that Holtby – who's allowed four goals or more in eight of his last 16 games – needs to shake himself free from the funk he's in if the Capitals are to be successful this season. It's comforting, at least, to know Holtby was able to stop the bleeding after Samsonov was pulled, stopping all 12 of the Isles' shots in the remainder of Monday's loss.

"Do goalies have different styles that will actually affect the way you guys play," Junkies host Eric Bickel asked. "Or does it really not affect it?"

"We have a very good situation with two great goaltenders," he said. "You know, look at our record for the year. A big reason we're there is because we have a great duo of defenders."

The Capitals resume play Thursday in Colorado at 9:30 p.m.