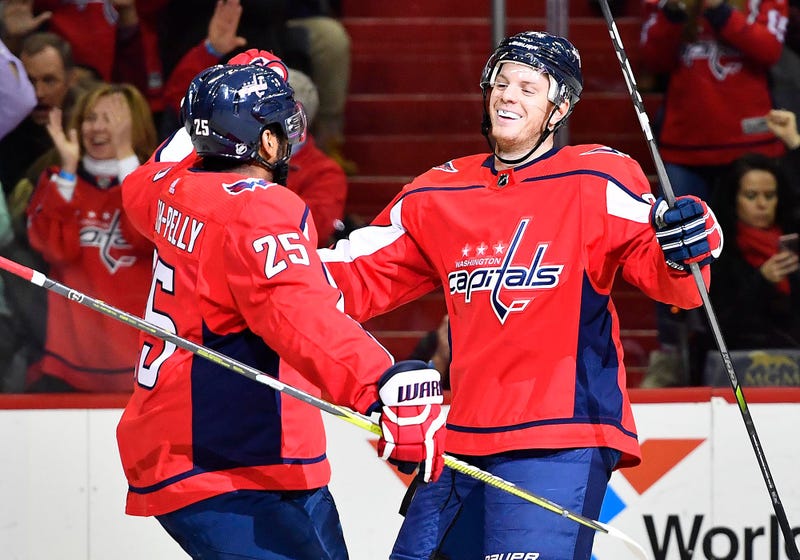 Devante Smith-Pelly has followed through with his commitment to stomp out racism in hockey.

When he and Capitals teammate John Carlson saw what happened to a local youth hockey player in a recent tournament, they decided to act, for the positive.

On Dec. 29, 13-year-old Divyne Apollon II and his fellow Metro Maple Leafs (Odenton, Md.) were playing in a tournament against a team from Pennsylvania. Divyne, the only black player on his travel hockey team, was taunted with monkey sounds from opposing players, the n-word and chants of "Get off the ice! Go play basketball!"

After the opposing team's coach – and referees – did nothing, Divyne's teammates did. They dropped their sticks and brawled with their opponents in the third period, resulting in Apollon being suspended for the rest of the tournament. For their next game, teammates put stickers on their sticks depicting the word "racism" crossed out by a hockey stick.

On Tuesday, Smith-Pelly and Carlson surprised the Maple Leafs with a video message, delivering the news that they'd been invited to the Caps' Jan. 14 home game against the Blues. Afterward, Divyne and his teammates will meet the Capitals.

On Thursday, Smith-Pelly discussed what led to him getting involved during his weekly 106.7 The Fan appearance – presented by F.H. Furr – with Grant Paulsen and Danny Rouhier.

"We heard about it. It was making its rounds on Twitter," Smith-Pelly said. "So the day we saw it – Carly saw it, I saw it obviously – and we kind of had the idea, maybe we should invite Divyne and his teammates to see a game. It's always important to not only invite Divyne to come in, but also to invite the whole team, seeing as they stuck with their teammate."

Smith-Pelly has seen this behavior before. It happened to him nearly a year ago. As he sat in the penalty box during a Feb. 2018 game in Chicago, four fans subjected him to racist taunts, shouting "basketball, basketball" at him. The fans were identified and ejected from the building, and later permanently banned from future Blackhawks games.

"I think the main message I try and pass on in this situation is, for every one – be careful with my words – one dummy out there that's being ignorant, there's a bunch of people that don't feel that way, and care about you and have your back," Smith-Pelly said. "When that happened to me, when I was in the dressing room kind of upset about it, my team had my back. And the same thing went for Divyne. They went out there and fought for him. He can go into that room and see, you know, these guys have my back and not everyone thinks that way."
"They're coming in on the 14th," Smith-Pelly said. "So we'll meet the team and hopefully they enjoy it."

After Divyne was suspended from his game due to a fight at the end of his most recent game. It was revealed he'd been ridiculed with "monkey sounds" by some of the white players from the opposing teams. Which opened a bigger investigation to discover he's been dealing with this for some time, being called the "n" word, being told "he belongs in basketball not hockey". The parents & his fellow teammates created this sticker & all wore it into tonight's game as a sign of solidarity towards Divyne & I! #TeamAPOLLONHockey