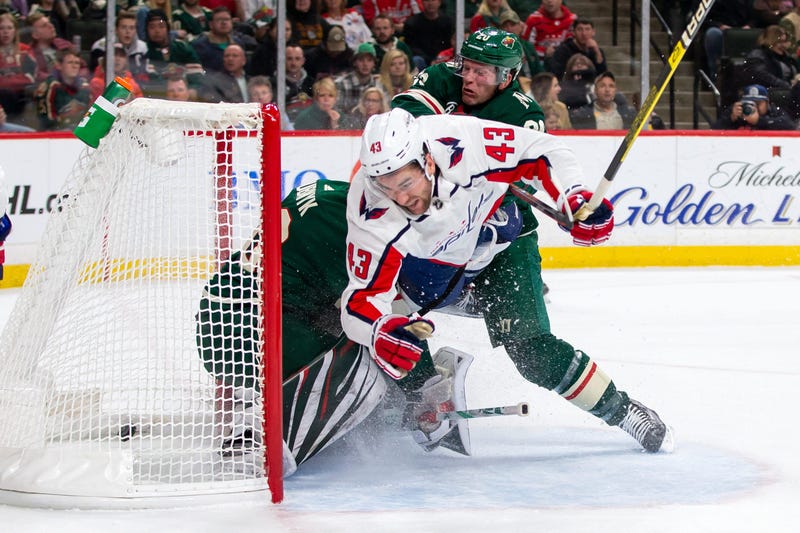 Tom Wilson is back and with authority for the Stanley Cup champion Washington Capitals, who walloped the Wild in Minnesota 5-2 on Tuesday night.

Wilson, returning from a 20-game suspension that was shortened (finally) to 14 games by neutral arbitrator Shyam Das on Tuesday morning, was immediately inserted on the top line that helped win the Caps a championship last spring.
With Alex Ovechkin and Evgeny Kuznetsov at his side, Wilson and the Caps took a 2-0 lead to the first intermission because Wilson charged towards the net and banged home a beautiful feed from Dmitry Orlov for his first goal of the year with 28 seconds left in his first period of the season.

Somehow, the goal counted despite officials also calling Wilson for goaltender interference. Wilson clearly contacts Minnesota’s Devan Dubnyk after re-directing the pass and quite honestly, I was surprised they didn't take the goal off the board, considering how the NHL has it out for Wilson. Make no mistake, it was the right call to keep it 2-0.

"It was a first for me, to score and get a penalty on the same play," Wilson told reporters in Minnesota, per Mike Vogel of WashingtonCaps.com. "I was trying to do everything I could to get out of the way. I'll take the goal, and the (penalty) kill (unit) went out and got it done. It was good to see."
For his part, Dubnyk told reporters after the game, "I feel like there's got to be some sort of thought or effort to not just go 100 miles an hour into the goalie. I know he's scoring a goal. I'm not saying that there's any sort of maliciousness to it."

Dubnyk: "I feel like there’s got to be some sort of thought or effort to not just go 100 miles an hour into the goalie. I know he’s scoring a goal. I’m not saying that there’s any sort of maliciousness to it, but I think there’s lots of plays like that."

Longtime hockey fans will remember the legendary Gordie Howe and the so-called "Gordie Howe Hat Trick" which was a goal, an assist and a fight.

"Top Line Tommy" as some call him may have possibly created a modern-day version of that with a goal, a penalty and of course a major fighting penalty, as he dropped the gloves right off a face-off with Marcus Foligno in the second period.

Tom Wilson fights in his first game back pic.twitter.com/7H3kPcfT5o

Wilson's biggest impact, however, may have come on the penalty kill. The Minnesota Wild were 1-of-6 on the power-play Tuesday night, and Wilson played 5:23 with the Caps shorthanded. He would have played more if not for being in the box for the controversial penalty.

Wilson has always been one of the Caps' top penalty killers, and his absence for the first 16 games was glaring. Entering Tuesday night, the Caps were 29th in the NHL in killing off penalties at 71.7%. Only Philadelphia and Ottawa were worse.

Wilson played almost 17 minutes in his first game back, showing no signs of being limited by Todd Reirden or conditioning. Alex Ovechkin played four seconds more than Wilson Tuesday night, and Lars Eller was a beast at 19:23.

A big win for the Caps to start an important road trip. A hell of a season debut for Wilson, and perhaps the best kind of double middle finger salute to the NHL that he could offer.