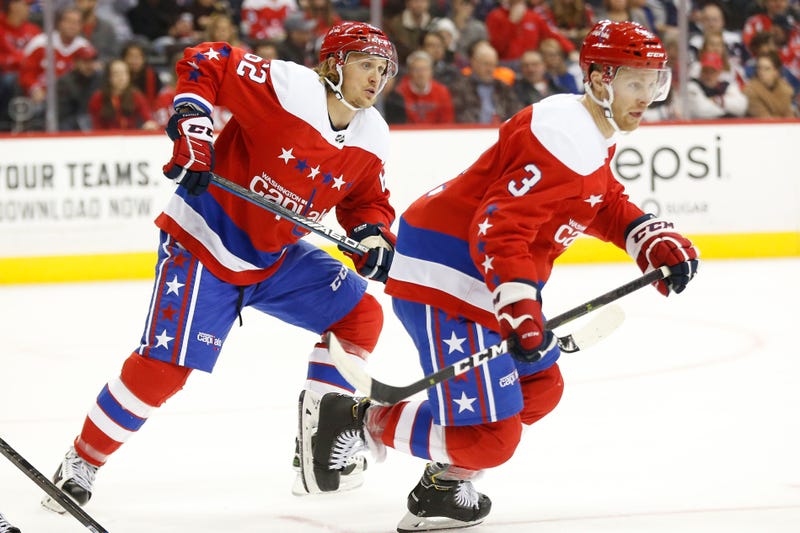 The Stanley Cup Champion Washington Capitals were quiet on Monday. The NHL trade deadline passed and the Caps made no moves.

They weren't even close, according to General Manager Brian MacLellan.

"Today was relatively quiet. I think we ended up getting what we wanted to accomplish done a little earlier. Today was quiet. Maybe a couple of phone calls but more just watching what else was going on around the league," MacLellan told reporters after the deadline passed.

While the Caps weren't active while the rest of the NHL was wheeling and dealing, they certainly did not stand pat. As Capitals fans know, Carl Hagelin was acquired from the Los Angeles Kings and Nick Jensen was picked up from the Detroit Red Wings on Friday in a deal that sent Madison Bowey packing.

"Both those guys address needs for us. They're both competitive players," MacLellan said. "Both add a little speed to our lineup. Both good on the penalty kill and both good five-on-five players. So, I think, you know, I'm excited what they're going to add to our overall team."

The two newest Caps made their debuts over the weekend with Hagelin playing in Buffalo Saturday and making his home debut Sunday. Jensen joined him and the rest of his new teammates at Capital One Arena during a wild 6-5 overtime win over the New York Rangers.

Now – our grades for the trades the Caps did make and what they did not address by Monday's deadline.

The deal cost the Capitals in a few ways. Washington traded a couple of draft picks, but they also had to expose playoff hero Devante Smith-Pelly to waivers.

"The Hagelin acquisition – we needed to create cap space," MacLellan explained. "It was important, I think, to get Hagelin in and we had two ways to do it. It was both Smith-Pelly or Jaskin, and we needed to go through waivers. We went back and forth on which one to waive, a couple of times, and then we changed our mind at the end and waived Smith-Pelly so we could the Hagelin (deal).

Whatever the Caps had to pay and risk, it was worth it to get Hagelin, who has been a thorn in the Capitals' side over the last seven years in the Stanley Cup Playoffs with both Pittsburgh and the Rangers.

He kills penalties and played 2:32 of short-handed time on Sunday. The three power plays the Rangers had with Hagelin on the ice should show you everything you need to know. New York did not score, but they did not have a shot-on-goal on either of the three power plays. The Rangers scored their goal with the extra-man when Hagelin was in the box for a hooking penalty.

He only adds to the playoff experience the Stanley Cup champions have built over the years and can play on either the second, third or fourth lines. He took one face-off draw Sunday in the defensive zone and won it. The Caps are still the worst face-off percentage team in the NHL as of Monday, at 45.9 percent.

Nick Jensen: A
The Capitals acquired the skilled defenseman from Detroit and immediately re-signed him to a four-year, $10 million extension on the same day. Clearly, they believe. If first impressions are worth anything, Jensen was a steal by MacLellan and Washington.

On Sunday, without even practicing with his new team, he paired with Brooks Orpik and played a very solid 14:16 of ice time and was a plus-1 on the day. He had three shots-on-goal, two hits, blocked a shot and drew a penalty on the Rangers.

He also helped kill penalties with 2:30 of short-handed ice time and was not on the ice for the Rangers power-play marker.

It's too early to say the Capitals got their Michal Kempny type acquisition, as they did last year, but he had a terrific debut.

The Caps and MacLellan failed to address a face-off specialist at the deadline and perhaps that was by design. Mac just wasn't interested in only acquiring a player to win draws, saying, "Yeah, I'd love to have a great shot, a guy that plays a lot and can take face-offs. I don't know that we were considering bringing in just a pure face-off (specialist)."

This was humorous. #Caps GM Brian MacLellan on if the @Capitals were looking for a player who could actually win a face-off at the #NHLTradeDeadline ...@1067theFan pic.twitter.com/iJBBZ6ks99

Our overall grade for the Caps at the 2018-19 NHL trade deadline? A simple B. Good, but could have been better.