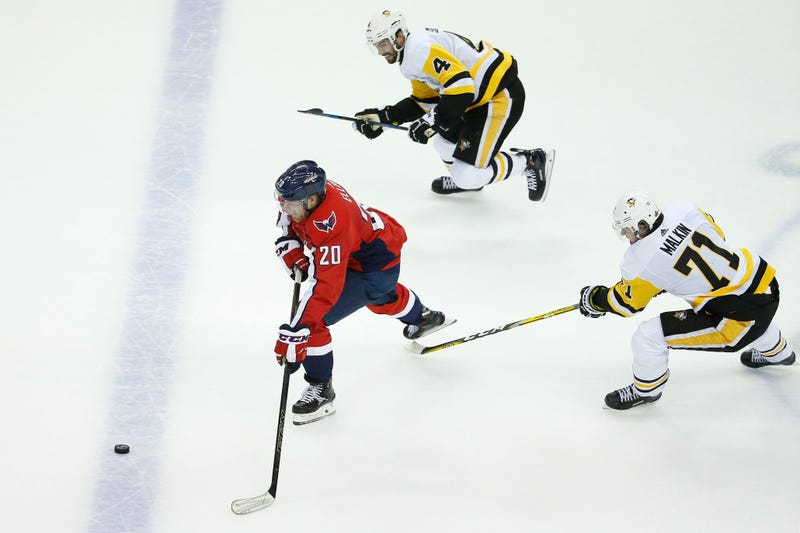 With 4:38 left on the clock of a crucial Game 5, everything changed. Perhaps for good. It certainly was all good for the #ALLCAPS as they took the lead on Jakub Vrana’s go-ahead and ultimately game-winning goal.

The Capitals had the lead for good, yes, but still had time to kill and the dangerous two-time defending Stanley Cup champion Pittsburgh Penguins to vanquish, to move to within one win (in the next two games) of where they haven’t been in 20 years.

How did the Caps respond to their somewhat lofty perch? They buried two empty-net goals and allowed one shot-on-goal to the powerful and pesky Pens over the final four-plus minutes.

That’s a killer instinct. That’s something the Capitals have struggled to find in many cases during the "Rock the Red" era.

On Saturday night, they played an awful second period and should/could have been down 10-2 instead of only 3-2. They were fortunate.

Instead of pouting and whining about shaky officiating -- both missed calls, and tight calls against -- the Caps regrouped, dug in and kicked ass in the third period.

"What I liked about that, between periods, everyone took a deep breath, our leadership came through and everybody got on the same page," said Capitals head coach Barry Trotz.

"We got it back together. We were pretty determined," Trotz opined.

The Capitals came out, stepped on the gas pedal and went zero-to-92 in 52 seconds, as No. 92 Evgeny Kuznetsov took a perfect breakaway pass from new line mate Vrana and buried one past Matt Murray for the game-tying goal.

"He’s a good young player. He has dynamic speed. He can make things happen for sure," Trotz said of Vrana, who joined the Caps' top line late in the second period.

It was good offense, and lock-down defense as well, that fueled Washington at home.

The Caps allowed only eight shots on Braden Holtby the entire third period, after 13 in the first and 18 in the second, but the most important save Holtby made directly led to the Vrana goal.

The Capitals took three penalties in the second period and had to try and kill off essentially four full power plays in the second, but took none in the third.

To repeat: no penalties. Eight shots-on-goal allowed. One shot given up after the go-ahead goal with 4:38 left and they scored four times.

Why is this year seemingly different? Why are they on the doorstep of where they not only haven't been, but simply need to be?

"Probably experience. We have some good leadership. I think we recognize that. We've had a number of moments we've had to battle through this year and it's just made us a better hockey team," Trotz told reporters.