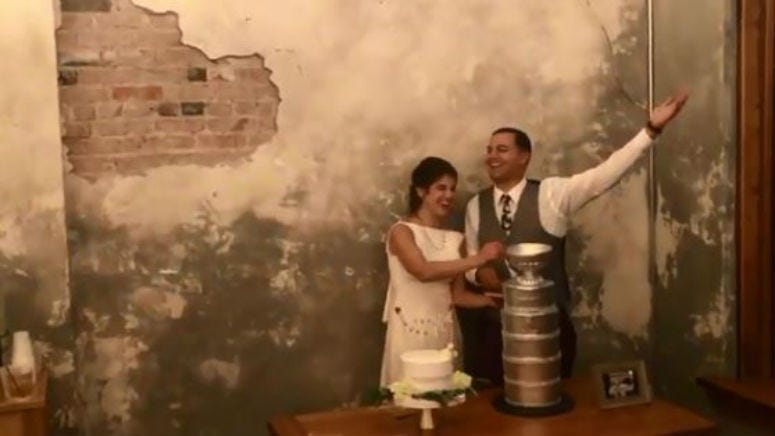 The names change but the story never gets old.

Lauren Williams, a D.C. transplant, had been watching every game of her hometown Capitals at The Blue Line, a hockey bar in Kansas City, where she now lives with her fiance, Jeffrey Shafer.

She'd never expected her hockey team to factor much into her wedding plans.

That changed on June 7, when the Caps – after 27 failed prior attempts, spanning 43 years – finally hoisted the Stanley Cup.

Lauren placed a call to her caterer.

"We need to cancel our cake," she said. "Can you make a Stanley Cup?"

On Saturday, Lauren and Jeffrey were married. And as they cut into the cake (er, Cup), they were able to celebrate their newfound matrimony as World Champions.

With their family and closest friends singing along to "We Are The Champions."

When you dedication to the @Capitals is so real that your wedding cake is shaped like the Stanley Cup!!! Well played Lauren Williams and @JeffShafer13 @FlareThaRebel !! #DCMEETSKC pic.twitter.com/jXLlKi1Vnf