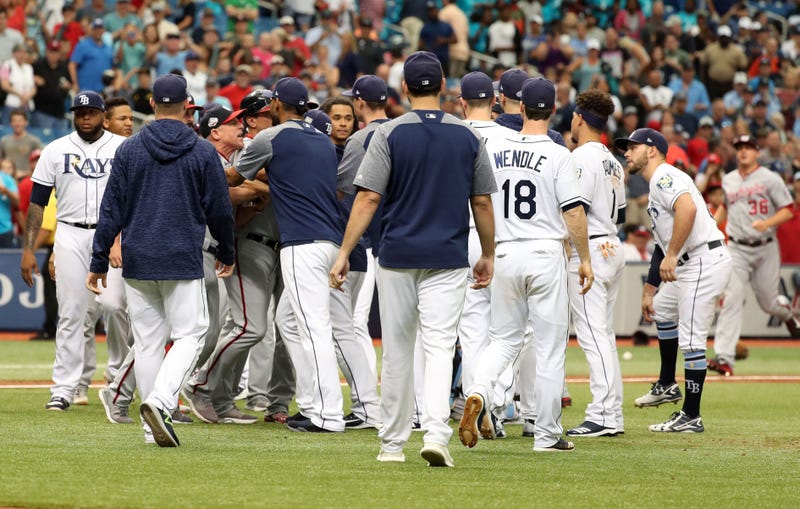 June 26, 2018 06/26/2018 7:52 pm
Sunday night's comeback win over the Phillies was a watershed moment for the Nationals, it appeared, as their bats got rolling and everything finally made sense as it should.

Two days removed, the Nats have gone scoreless in a pair of losses in Tampa Bay, held to one hit over seven innings by Blake Snell, in an eventual 11-nothing blowout on Monday, and three hits in a 1-0 loss Tuesday afternoon.

The Nats are back to trailing the Braves by 4.5 games and the Phillies by one in the National League East, and the questions have returned.

Tuesday morning, still reeling from the blowout loss the night before, Danny Rouhier of 106.7 The Fan stated why his panic level for the 2018 Nationals has gone through the roof.

"Forty percent of the seasons, they didn't climb out of it, of the last five years," he said, referring to the club missing the postseason in 2013 and 2015, two seasons with high preseason expectations, like this one. "Sixty percent, they did. This has all the trappings of 2015. It looks the same."

"The 'once ... gets healthy, then we'll figure it out.' We've been saying that since March. Once Adam Eaton is back to full strength. Oh, now he needs another surgery," he continued. "Once Ryan Zimmerman is back. Now he's out for weeks. Once Anthony Rendon is back. Now all of a sudden, the oblique, where he was day-to-day coming out of spring training, is five months long. Once Daniel Murphy's himself.

"What it assumes is nothing else will go wrong. What happens in sports, especially in this one, is stuff does go wrong. The 'nobody counted on the Stephen Strasburg shoulder inflammation thing,' when we were talking about once these guys get healthy, etc. When you've had this bad of a run – as they've had, really, in April and now into June – you've had this terrible stretch; you left yourself no outs, no net."

"So the next time that Max Scherzer, God forbid, slips on a banana peel, or somebody dives back into first base," he added, "now you're missing another guy for six weeks, etc."

Grant Paulsen wasn't nearly as concerned, placing his panic level at a four, on a scale of 1-10.

"I think the vast majority of their issues are injury related," he said. "And they know really well internally what they are. I've talked to people with the ballpark that are super high-ranking, as recently as a couple weeks ago, and they basically said we're in tread-water mode right now. We just have to kind of play .500 baseball, or close to it, in these next few weeks, stay within a handful of games, because we feel like we'll have a 20-win-in-28-game stretch coming. And that is what this team has done over the years when they've gotten healthy. It's what I fully expect that they'll do this time."

"So you're accounting for more injuries?" Paulsen asked his co-host.

"What I'm saying is, if everybody's back and healthy, of course you're right," Rouhier said. "If everyone's playing great and they're healthy, let's go."

"Fine. Playing. If everybody is, then they'll be better than they are right now," Rouhier said. "But that assumes that nothing else will go wrong.

"And what happens, as we've learned already this year, is that other stuff is going to go wrong. We just assumed Tanner Roark would just be better than he was last year. What if he's not? What if this is Tanner Roark now? What if this is sort of the new reality? Where, a guy that was pretty good in previous years, now has a second straight year with an ERA north of 4.00, where he gets hit around, can't put people away. Gio Gonzalez has been punching above his weight class for a couple of regular seasons, sort of pitching around a bunch of baserunners. What if that comes back to roost at this point?"

"My point is, when you play this poorly, as they have for an extended period of time, you now put yourself in a spot where to get to 92, 93 wins – which is probably what it'll take to win the division – you've got to play .620 baseball," Rouhier said. "That's hard to ask, to do that for that extended period of a time. That assumes that nothing else will go bad. It's hard to get to .620 if everybody's firing and everyone's doing great. It's hard to do that for 100 games; it's even harder now, with what they've set up for themselves. So, this group, to me, absolutely can salvage it. But am I confident that it's going to happen? I wouldn't say that I am."

The Nationals have been shut out for 1/3 of their games this month, their baserunning continues to be an unsanctioned goat rodeo, 4/5 of their rotation is hurt or struggling & their bullpen is beyond overworked.