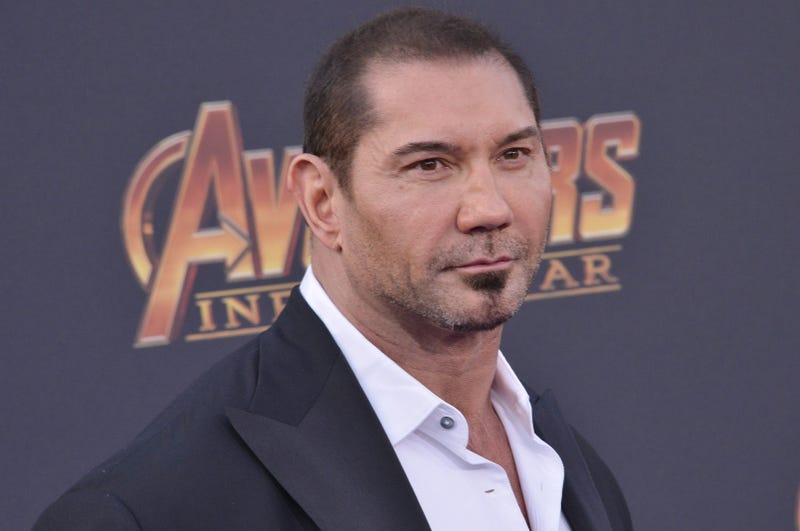 Dave Bautista says he was in recent talks with the WWE about making his return, but those talks fell through after the company stopped returning his calls.

"This is all insider stuff, and I usually don't share," Bautista said in an exclusive interview with Chad Dukes of 106.7 The Fan. "I'm really an old-school kayfabe guy. But they reached out to me earlier this year to possibly come back and do that thing with Ronda (Rousey)."
"And I said that I would be willing to do it only if we teased something for me and Hunter to go to Mania next year," he added. "And they said, 'Yeah, that would be great. I love that idea.' And I said, 'Well, that's great. I'll come back a few times during the year, and we'll tease it, and we'll work it and we'll milk it. And we'll go to Mania, me and Hunter, next year.' Oh, I love that idea. Let's do it!"

"And so we literally talked for about like three weeks and then they just stopped calling me," Bautista went on. "I sent a text to Hunter. I was like, 'Hey man, I don't know if you put any more thought into what's going on. I'm really excited about the possibilities.'

"And I literally never heard back from them. They just stopped talking to me about it. Man, I don't know what else I can do to try to... I want to end my career the right way. I'm faithful and loyal to the WWE. I'm proud of being from there and I want to do good business with them, but they just don't make it easy. You know, they just don't."

"I t makes that they would cool off, because you're in Blade Runner 2049, and Avengers, and Guardians of the Galaxy, and working with Jodie Foster, so why would you want someone like that to come in and be affiliated with your product," Dukes said tongue-in-cheek. "Despite the fact that you've won all of the championships and belts that you have."

"I mean, no. That doesn't make sense at all. I mean, that'd be horrible for them," Bautista said. "But I don't get it, man. But I told them next year would be my last year. I'm turning 50 next year. I'd be willing to... I feel great. Physically, I'm in great shape. I've never let up on that."

"But I just don't want to be the old guy in the ring and I don't want to overstay my welcome," he said. "I just want to end my career the right way and next year will be the last opportunity, so if we can't make something happen by next year, then I'm just gonna officially hang it up."

"I'm doing okay for myself, so I don't need to be there," he added. "I just, I love it there. Even thought the fans totally crapped on me the last time I was there, I would still go back in a heartbeat and love to entertain them, and I would have fun doing it, man. I'd be happy to be there. But, I just don't get it, man. I don't get that company. I just don't understand."
Follow @ChrisLingebach and @1067TheFan on Twitter