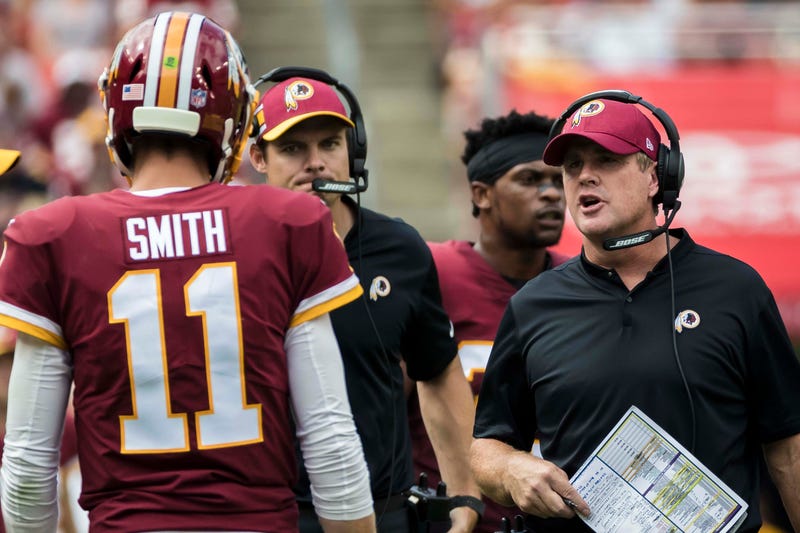 DeAngelo Hall provided a revealing criticism of Redskins coach Jay Gruden and his team Monday, telling the Junkies Washington doesn't always show the flexibility to make necessary mid-game adjustments.
"I think we as a team, and Jay it seems like, we just get stuck in, not our ways, but just stuck in doing things that we've prepared to do," Hall said in his weekly appearance on the Junkies. "Just because we've practiced it all week, if it's not working, we got to get rid of that. We've got to figure out something else."

"We've got to go in at halftime and say, 'Hey look, guys. I know we did this all week, but this is the reason we do training camp. This is the reason we have such a long offseason is we put in everything. Yes, the game plan this week was to do this, this, this. But look, we weren't expecting them to do this. They did this, so we have to change what we're doing.'"

Hall played for four seasons under Gruden, and thus has insights few others would have into how Washington's head coach operates. And Gruden himself told reporters after Sunday's loss to the Colts he didn't adjust fast enough to Indianapolis' defense neutralizing the Redskins' big play ability down the field.

"If we had to do to all over again, we'd have been (less) ambitious with some of our deep game and more geared towards moving the ball and getting the ball out of our hands and let the playmakers do their thing," Gruden said. "As it turned out, we failed."

But as Hall noted, the culpability for this lack of flexibility doesn't just fall on Gruden's shoulders.

"It's hard when you've practiced something over and over again for the whole week, and then you find out it's not working. And then to throw it out, you almost feel like, 'Man, I did all this work, and now I gotta start all over again?' But in the NFL that's what you gotta do."

Hall also explained how the Colts made adjustments to have success against the Redskins.

"I hadn't seen the Colts running a lot of Cover Two," Hall said. "But obviously, (Colts coach) Frank Reich, being a guy who was in Philly, he knew, 'Look, if I can do X, Y, Z and get some pressure with my front, I can drop these guys in coverage ... Yeah, they ran the ball successfully last week, but I know Jay's gonna revert back to throwing the ball. That's what he likes to do.'"

"Maybe that was Frank Reich's mindset, I don't know. But that's sort of what it felt like. And you saw the Colts do something totally different than they did in the previous week. Their front got beat up last week, they come out here and they look like they have three or four Pro Bowlers on that defense."

Great stuff from De Hall. I asked about Jay - strengths & weaknesses. He was complimentary but also insinuated coaching staff may get a little too wedded to their game plans even when it's not working. Maybe too reluctant to scrapping it all & trying something totally different.