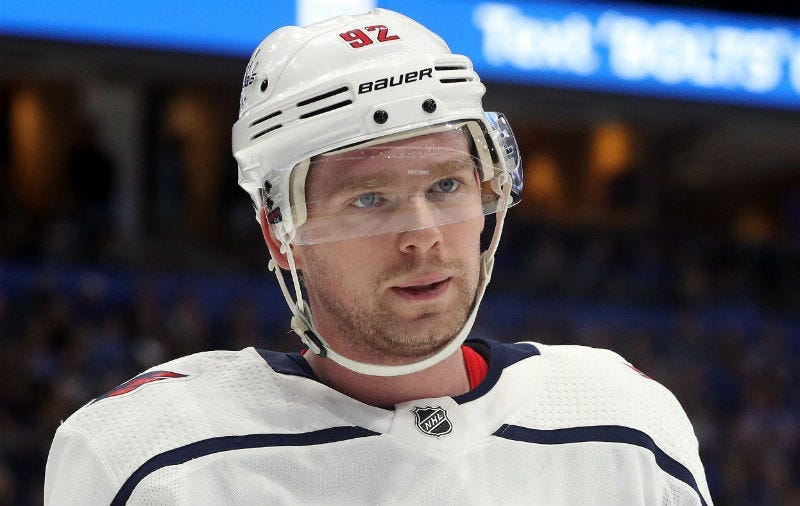 You've just been cleared by the NHL for putting yourself in a situation you shouldn't have been in.

Lines of 'white powder' on a table next a rolled-up dollar bill? Really? And you let someone take video of it? You clearly didn't mind the video in the moment.

This might be harsh, but it's the truth. It's time for you to grow up!

Never again can you put yourself, your family, the Washington Capitals, Caps fans and the National Hockey League in a position where they have to issue an awkward apology and a clumsy explanation for something you did.

One year ago, you were on top of the world. The Capitals were too. You won the Stanley Cup in Las Vegas. The parties and the celebration were one epic bender after another. For the Caps, for a city and for a Cup that had never lived on the edge quite like last summer.

At some point, and the exact timeline isn't clear, you walked into a hotel room and sat down next to two lines of this unknown substance.

You admitted earlier this week you were uncomfortable with the situation and realized you needed to leave. The video clip did not appear to show any urgency, but maybe you left quickly after? I hope you did.

Where you need urgency is in taking a huge step in the right direction on the maturity scale.

Already, the story has changed about when this incident occurred. First you said it was after winning the title in Sin City. Now, apparently it happened when you and the Caps were in the middle of a title defense, when you and your teammates were playing, once again, in Las Vegas.

That makes it worse!

Why? It's somewhat understandable not to be thinking straight after achieving the ultimate glory. But after a regular-season game in December? Did you catch the "Vegas Flu?"

I just hope for your sake and everyone's future that this was it. I hope there's no "smoking gun" that inevitably seems to show up way too often. Just ask Ray Rice or Kareem Hunt.

You're a good guy, from what I've observed. You are entertaining as hell and you make me laugh when you're cracking one-liners or dropping F-bombs.

Evgeny Kuznetsov unplugged ..On making Playoffs next year & what he can change..."There's f@!#-ing 31 teams in the league..." #Caps @1067theFan pic.twitter.com/jhXkNGPeAe

You even got me some run on NHL.com. Thanks, bird man!

You're a wonderfully talented two-way center, part of a top-line for the Caps last spring that propelled the team that drafted you, believed in you and paid you, to a championship.

You get feisty when we ask you about your struggles in a first-round playoff loss to Carolina. I get it.

That doesn't make you a bad person. It just means when you make bad decisions, like this one, that it's time to mature and do so quickly. On the ice and off. Take it from someone who knows, it's not healthy to be agitated all the time or to put yourself in difficult situations.

Alex Ovechkin found out at some point in his legendary career that he had to make significant changes to his lifestyle to continue to be the franchise icon. If he ever wanted to raise the holy grail, he would have to settle down and work even harder. He did that again and again. But of course you know that.

There's a calmness and perspective that Alex has, no matter how good or bad things are going, that you need to adapt.

Some of that will come with age. Some of it will come with pressure to change. No matter which way it happens, it must start from within. And now, Evgeny - you must realize your actions and words affect many and shape your image.

Words, such as the ones you said earlier last season when you were being praised by teammates and around the league as a potential MVP candidate. You told reporters "to be MVP, you have to work 365 (days) in a year, but I'm not ready for that. I want to have fun."

It made me laugh. But, when I thought about it, I said maybe this is the problem.

The bird celebration is fun, Evgeny. Scoring goals and piling up dazzling assists are awesome. Winning a Stanley Cup? A blast! A regular-season MVP award? Rewarding.

You know what’s not fun? Seeing a video clip of one of your star players next to two white lines of an unknown substance and having the hockey world up in arms over what exactly happened.

Especially if you're Ted Leonsis – remember the guy who paid you? – and the Caps, who invested an eight-year, $62 million contract in you. He did that because he thought you were one of the few who will usher the Caps into the post Ovechkin era.

That's not fun. That's not acting like a team player or a champion, no matter what the explanation is.

You might be mad about this, but you must make better choices. You did nothing illegal, but you always have to think. 365 days a year, Evgeny. That's more important than having fun or winning an MVP.

Evgeny – YOU are capable of way better than that. Now it's time to prove it.