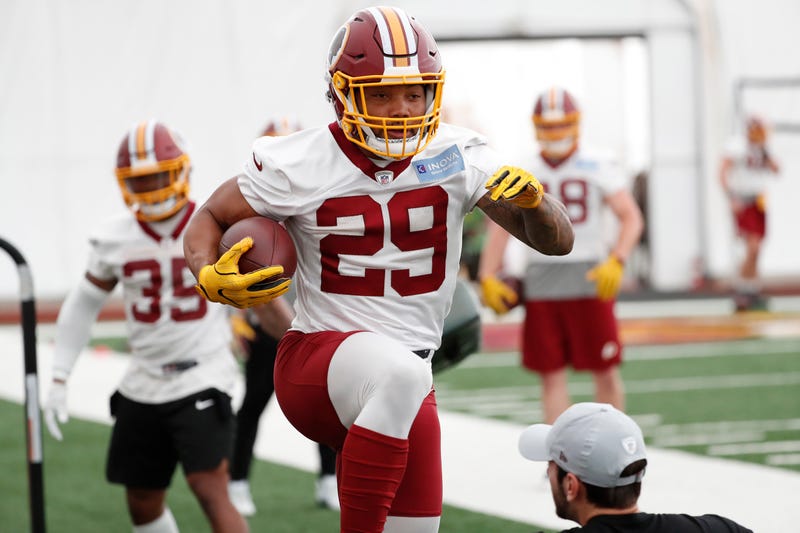 For the teams who passed on Guice, Doug Farrar of Bleacher Report warns, "This I think will be seen as the biggest mistake of the 2018 draft."

"I think the reports on him pre-draft were murky at best," Farrar told Chad Dukes of 106.7 The Fan. "I think it was overplayed and I think a lot of teams are going to really regret passing on him two or three years from now. There were six running backs that went before him, and there are some guys in front offices who are going to have to answer questions: 'Why did our guy gain 400 yards, and Guice just gained 1,200 for the second straight year and caught 35 passes for 400 yards?'"

Farrar sees Guice as being the centerpiece to a Redskins offense revitalized with a new deep threat in Paul Richardson.

"I mean, I'm watching his tape, and Saquon Barkley had some great tape too, but I thought, in my mind, it was a toss-up between Barkley and Guice for best running back in this class. And Rashaad Penny, who I like, who went to Seattle," he said. "But Guice is a special player. Whatever's going on in his head -- and, again, I think those reports were overblown, and they have proven to be over time. A lot of guys who were all, 'Oh, he's this and he's that,' have sort of backtracked. And when you go purely on the tape, this is a special player."

"JP Finlay of, I think it's NBC Sports Washington, detailed one play in minicamp where Guice was used as a distraction for a deep pass to Richardson," Farrar said. "And I think it really does go back to, I think, Jay Gruden's scheme with maybe a half a hand tied behind his back. No deep receiver, no high-volume receiver in Pierre Garcon, as he had. So (DeSean) Jackson and Garcon are gone, your rushing attack, you're kind of piecing that together, Jordan Reed hurt as always. And that's a problem, because he's a great player when he's on the field, but he's hardly ever on the field."

"And now you've got a guy in Derrius Guice, who you can design your entire offense around that guy," he explained. "He did have injuries last year, but if you go back and watch his 2016 tape -- and, apparently, he did well at the combine -- if he's healthy, I think the Marshawn Lynch comparisons are apt. I think he has that potential level of power, second-level speed and lateral agility.

"One of Marshawn's most underrated characteristics was the ability to be in a tight space with defenders all around him, and not just power his way out, but he had wonderful feet and he would just dance his way out of problems. And I think Guice has all those abilities. So then your play-action has been more effective, because you're switching a guy from pass coverage to in the box, because you have to, because Guice is tearing that front-seven apart, which he has the potential to do. And that's one more defender Alex Smith doesn't have to worry about."