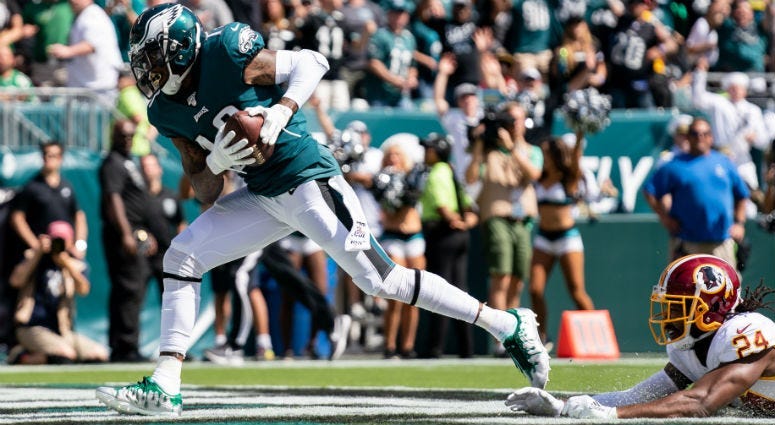 DeSean Jackson silenced detractors on both sidelines on Sunday, showing why he is still one of the league's best receivers entering his 12th season.For the Washington Redskins, it was like watching an ex become a runway model.Suiting up for Philadelphia for the first time since 2013, Jackson got a standing ovation from fans at Lincoln Financial Field when he was introduced before the game. He repaid Philly fans with a devastating performance against the team that scooped him up in 2014.Twice on Sunday, he caught 50-plus yard touchdowns (51 and 53 yards) against the Redskins' defense, ending the day with eight catches (10 targets), 154 yards and two touchdowns. That moved him into second place in NFL history in touchdowns of more than 50 yards (31), behind only Jerry Rice.

Jackson also showed versatility on Sunday, catching six other passes for 50 total yards and talking smack on any Redskins defender that would listen. And why not? He hasn't had a performance like this since Week 5 of the 2014 season."I couldn't have predicted it to be any other way. Not one moment in that game did I think we weren't going to win that game," he told the media."I've been over there in that (Redskins) locker room and I just know how they are…At halftime, they probably thought they had the game sealed and won. It's just gonna take one play (to get back in it)."Jackson provided that play and more, en route to the Eagles outscoring the Redskins 25-7 in the second half.It's hard to justify the gamble the Redskins took in letting him go after a 1,000-yard season in 2016 — a season in which he led the NFL in yards per reception (17.9). In fact, his overall 19.03 yards per reception in Washington led the NFL from 2014-16.Playing for Tampa Bay over the past two seasons, Jackson failed to make an impact in his only game against the Redskins. It took uniting with Carson Wentz back in Philly to exact his revenge.Looking ahead, the Redskins need to defend Jackson, and players like him, better. Too often, Jackson beat single coverage and ran free down the field, with a trail of Redskins defenders behind him.That can't happen against players like Antonio Brown (Week 5), Marquise Goodwin (Week 7), Stefon Diggs (Week 8), John Brown (Week 9), or Jackson again in Week 15.Given the Redskins' limited offensive firepower, they need the defense to stay out of footrace scenarios.