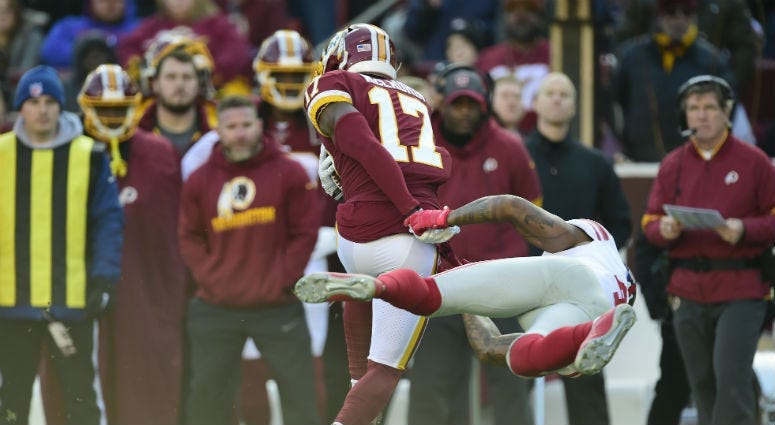 It's challenging for fans to appreciate what they've seen from the Redskins the past few weeks, amidst a 3-12 season going nowhere but quietly into the offseason.

The Redskins have gone 3-7 since Bill Callahan took over as interim coach, objectively terrible by almost any measure. But a 2-3 surge – with consecutive wins over Detroit and Carolina, followed by close games (losses) against Green Bay, Philadelphia and New York – has shown a dynamic, young offense led by a rookie quarterback showing positive growth.

There is reason to believe the Redskins – regardless of the coming offseason changes – are heading in the right direction, something Santana Moss made a point to acknowledge during his weekly 106.7 The Fan appearance with Chad Dukes, presented by Paul Henry's Windows.

"(Dwayne) Haskins showed us that he was playing phenomenal that first half (against the Giants)," Moss said. "And when you look at it, we're at a state right now where, yes, we can win that game and say, 'Okay, Haskins went out there and fought through another injury and we won.' Or, we can sit here and be talking about Haskins went out there when he shouldn't have, in a situation where we're not gonna get nothing out of it, and hurt himself worse and now we gotta worry about finding another quarterback for next season."

"I think it's just too much for these guys to worry about and they should just be happy with what the they see," Moss said of Redskins fans. "The team has really shown you for the last few weeks that they have some fight in them and they're playing pretty good. Despite not winning these games, they've still been showing you that they've been giving a winning effort."

Fans have been conditioned, Moss says, to focus on negativity in losses, which ignores the positive growth the team has shown as it plays out the string in this lost season.

"I understand when the past few years have been like it's been, it's always something. Misery loves company," he said. "Especially those fans who have already been a part of this, they're looking for anything that they can just sit in here and call your show and cry about."

"Trust me, when you're not winning, everything is wrong. No matter what it is," he said. "'Oh, he had on yellow shoe strings in his shoes.' They're gonna find a reason to say why we're not winning or why they're mad.

"But I look at it like this. At the end of the day, all we can appreciate – and I've been telling you this for years – you know, when the guys go out and play like they've been playing the past few weeks, I'm okay with the outcome, because I understand somebody has to win the game. But I want to see the effort, and that's what these guys have been displaying for the last few weeks."

"They've been showing that they can compete with anybody and half of that is because of what Bill Callahan and his staff has been doing," Moss continued. "A few months ago, the team looked like they had nothing in them. It was crazy how we was losing games with all these high-powered draft picks and players that we're seeing now, that it's the same guys, and we lost most of those guys, and we're still out there giving teams a run for their money.

"So it just shows you, man, that when you pay close attention to the details, and you make sure these guys are not going through the week just going through the week, they're out there emphasizing, over-emphasizing certain situations of the game and these guys' jobs, they can go out there and give you a winning effort. And that's what I respect and appreciate the most from what I've been seeing lately."