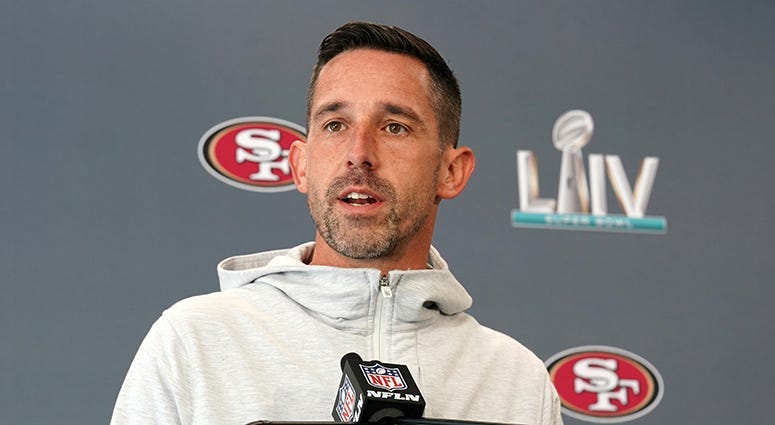 Did the Redskins miss out on San Francisco 49ers coach Kyle Shanahan?
Uh, no. The timing wasn't there and Shanahan wasn't ready in late 2013 when his father Mike Shanahan and staff were fired to make way for the mediocre Jay Gruden era.
Still, well-regarded offensive coordinator Kevin O'Connell's recent exit following the hiring of coach Ron Rivera makes one wonder if the Redskins undervalue their own assistants. For the second straight year, a former Redskins assistant leads a Super Bowl team. Shanahan's 49ers meet the Kansas City Chiefs in Sunday's Super Bowl LIV after Sean McVay led the Los Angeles Rams to the championship game last year.
McVay might have been the smarter choice for Washington to retain. He was clearly a rising force as the offensive coordinator. The Redskins just weren't ready to part with Gruden yet. That McVay became the youngest NFL coach since 1938 when hired by the Rams just two days short of his 31st birthday in 2017 wasn't surprising. The grandson of NFL coach John McVay is a savant who took a middling Rams team quickly to the top.
Weeks after McVay's arrival in Los Angeles, Shanahan was hired in San Francisco after the offensive coordinator's Atlanta Falcons lost the Super Bowl, despite an early 28-3 lead. Many still blame Shanahan's aggressive play calling for allowing New England's late 34-28 win. Then again, it wasn't his defense that surrendered 31 comeback points.
McVay and Shanahan were together in Washington for four seasons, but they're very different people. McVay instantly impresses people without trying. Shanahan doesn't care what anyone thinks and that arrogance cost him early. While some fellow Redskins coaches liked Shanahan for his work ethic, he rubbed many wrong with his abrasiveness. Shanahan was fined $25,000 for criticizing and confronting replacement officials after a 2012 loss to Cincinnati.
But, Shanahan said on Monday that he learned not to worry over criticism while in Washington.
"My four years in Washington helped me," said Shanahan during a Super Bowl press conference. "You can't worry about what people say and stuff. When you get worried for being blamed for stuff, that's when you hesitate."
But, such an abrasive style forced him to wait longer for a chance. Yet, he's a better coach for it. Shanahan spent 2014 in Cleveland before resigning over being forced to play quarterback Johnny Manziel. History has already shown Shanahan was right, but he didn't learn how to work with others – that is critically needed as a head coach.
Shanahan then spent two seasons in Atlanta and was named 2016 NFL Assistant Coach of the Year in leading the high-powered Falcons offense to the Super Bowl.
But humility finally found Shanahan in 2017 when opening 0-9 as the 49ers coach before finishing 6-10. With quarterback Jimmy Garoppolo injured early last season, the 49ers finished 4-12.
"I don't wish an 0-9 start or a 4-12 season on anyone," Shanahan said. "We really learned from it. A lot of guys got to play. We learned to go through adversity together, and that made us stronger. The opportunity our guys got this year from what they learned their first two seasons made us stronger and battle-tested and led us to here."
And that's 15-3 and NFC Champions before facing Kansas City as slight underdogs. Shanahan is finally fulfilling what was expected at age 40. It just took a little longer. The Redskins were right to pass in 2013, but the 2020 version is much more ready to succeed.
Rick Snider has covered Washington sports since 1978. Follow him on Twitter: @Snide_Remarks