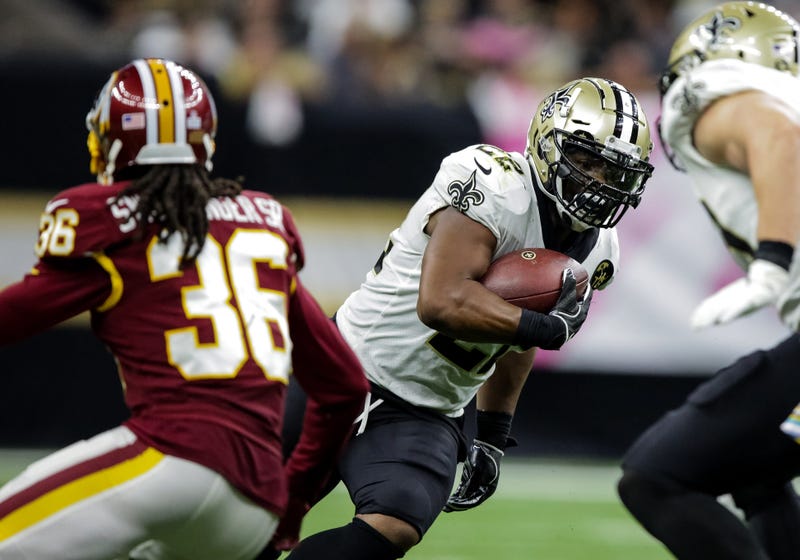 October 9, 2018 10/09/2018 6:14 pm
D.J. Swearinger says the Redskins should feel embarrassed with their performance in Monday's 43-19 loss to the Saints and everyone in the locker room should needs to understand it's time to get down to business.

The #Saints are literally dancing on the sideline. They're clowning the #Redskins in every way.

In a 106.7 The Fan appearance with Grant Paulsen and Danny Rouhier, Swearinger was asked how the Redskins turn the page from such a lopsided defeat.

"It's not really difficult if you're a winner at heart, because you never want to lose, period," the Redskins safety said. "And you never want to get blew out, so the embarrassment and the shame on the inside, going on Monday Night, losing by that margin in front of everybody in the world, the competitor in you, it's not hard to come into work the next day."

"You've got to come into work the next day with your hard work hat on," he said. "No smiles on your face. You've got to have a business tie on when you come to work. There's no more games being played when you get blown out by 30 points. You come to work, it means business."

"Because we really can't do it – we got all the talent in the world, but talent is nothing if you don't add the chemistry with it. Moving forward, we've got a long streak, we've got a long 12-week streak where we can do that if we get the chemistry right and get the mindset that we need the championship mentality, and we're relentless in all our efforts every single day. We do that, man, we'll be fine."

Swearinger has been a vocal leader on and off the field, never one to shy away from pointing out problems he sees in the team's culture. Again Monday night, Swearinger, after the loss, pointed to that problematic culture.

"I've been preaching, trying to change the culture," he told reporters. "But it takes all 53 players with the same mindset. Not only the 53, but all of us in this together. Coaches and players have to have the same mindset that we’ve got a championship team.

Asked if he sensed a lack of professionalism in the week leading up to the loss Monday night, Swearinger said, "I just experienced that the Colts week, just for whatever reason after that first game. I don't think I've experienced that since then."

"I don't really know what the problem was this past game," he said. "I just know we've just got to fix it. We've got to fix it fast. We have a division that's wide open and we can take it. We can take it. It's not the end of the world for our division. We're still in a good place, so we've just got to get all of that out, find some type of way to get whatever it is that we've got to do to win together as a group. All off us are in it together. We've got to find a way to be together and get the chemistry right. Guys that want to make plays and want to win, that's what we need."

Swearinger was asked, as a leader, if he'll speak up when he sees teammates cutting up and not taking their preparation as seriously as they should.

"We've had guys step up and say stuff like that, especially after a loss," he said. "Just wondering why guys... just being serious, on a serious note, that's sort of the cultural change of things. Just understanding when you lose, you know that means business. That's not a play-play session where you come back to work on the next day, it's time to get it. Not even just the next day, but the whole entire week.You've got to have it on your mind that we just got embarrassed and we've got to go out the rest of this season and show the world that we're not that team that we showed on Monday night, because all we've given the world is that Monday night game. They judge us by that. As a team, as a player, as a competitor, you want to come back and just show the world that we're not that team that we put out there on Monday. We're gonna change this thing around."

On Josh Norman's benching: "It's not a concern, man. Yesterday was a bad night for us. Things get heated in the heat of battle. Not too worried about it, man. You know he'll bounce back and we'll move forward from it and we'll be positive moving forward. We'll just fix it, man, and try our best to lead the group and be the best that we can be for our group and set examples."

"It's just like I said, yesterday was a bad day for everybody," Swearinger continued. "You can't really hang your hat on things like what happened yesterday. We just got to move forward and try our best to be winners and win this division. Moving forward, it's not the end of the world. We got a long season ahead of us. Things like that happen from time to time in the heat of battle. We just got to move forward from it and get ready for Carolina."

Monday night was as great for the Saints as it was terrible for the Redskins, with quarterback Drew Brees surpassing Peyton Manning to become the NFL's all-time passing yardage leader. Brees found rookie receiver Tre'Quan Smith through broken coverage for a 62-yard touchdown to break the record.

Drew Brees completed his first NFL pass to @terrellfletcher for 7 yds back in 2001 with the San Diego @Chargers . 71,000+ yds later, he threw a TD pass to Tre'quan Smith for 62 yds to become the NFL's all-time passing leader. #GOAT pic.twitter.com/9hz6UXn5A9

"We've just got to do a better job in the secondary. That's all," Swearinger said. "Everybody understanding what's going on. We've just got to be on the same page and we've got to move forward. We can't have any more busted coverages in the secondary. That's not how we win football games. We've got to do a better job with it this week in preparing as a secondary and be the best we can be."