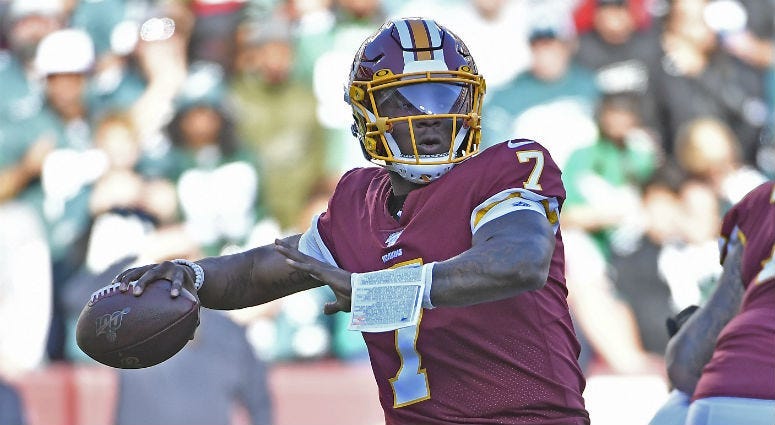 Dwayne Haskins looks to carry the momentum he gained in last week's loss to Philadelphia, his best game as a pro yet, into Sunday's contest against the Giants.

While still a defeat, Haskins completed 19 of 28 passes for 261 yards (68 percent), two touchdowns and no interceptions for a 121.3 passer rating, the highest of his eight-game career. Haskins made the big passes, the small ones, and everything in between.

"And that's the thing that stands out the most with Haskins, that if you're a spectator and you're a guy that's watching this guy and judging this kid, trying to see if he's our future, well, he should have shown you every week he's getting better with some of the things that we might have questioned the week before."

"And you can live with that, seeing that from a young guy, especially a guy who didn't play that much in college," Moss continued. "I'm looking forward to his career also just to see how he's gonna pan out, because I understand that the team that he's surrounded with right now is not a very good team.

"But when you watch their play the last few weeks, ever since he became the starter, you can see the team as a whole playing their hearts out and leaving everything on the field, because 1) they're coached well and two, all those guys, some of the contributions that we're getting from most of those young guys, they're all eager to go out there and be winners.

"So I think (last Sunday) was a prime example of his maturation and how he's progressing every week, just showing you that whatever you say that I can't do or I didn't do well, I'm gonna try to correct that next week."

"Now, he might now wow everybody," Moss added, "because everyone wants to see something different, but as a football player, knowing what I'm looking for in the quarterback, (the Eagles game) was his best performance and I'm looking forward to seeing plenty more like that. He said (Sunday) was an average day for him, because he wants to be better than that. To me, that was great to hear that from him, because that tells me he expects more from himself also."